Farmony says Ireland can become self-sufficient in leafy greens, herbs and micro greens thanks to its approach to vertical farming 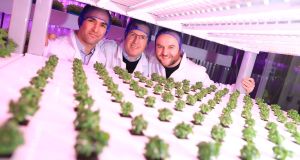 Animals grazing peacefully in the fields and serried rows of crops stretching far into the distance are what usually come to mind when we think about farming. It’s a pastoral image deeply embedded by tradition and worlds away from how they do things at the agritech start-up Farmony, which builds high output, controlled environment vertical farms to produce leafy greens and herbs.

On a Farmony farm the crops are grown indoors on multiple layers of tiered shelving. The method is ideally suited to growing salad leaves and micro greens and a unit can produce in 55sq m (592sq ft) what would normally occupy five acres if conventionally farmed. It also only uses about 5 per cent of the water required by traditional growing methods and a unit can be operational 365 days a year.

“Vertical farming is not new. In fact it’s been around forever. Just look at the Hanging Gardens of Babylon or rock faces or the seashore with plants growing, irrigated and fed by water,” says Farmony co-founder John Paul Prior.

So, in the strictest sense, vertical farming isn’t new but its commercialisation is. The first large-scale commercial application only came on stream in Singapore in 2012 and Farmony is joining this nascent industry at a time when it is increasingly seen as part of the answer to sustainably and economically feeding the world’s growing population.

What makes Farmony’s approach innovative is twofold. Firstly, it has designed its system to support multiple crops requiring different growing conditions. Secondly, it has put everything a grower needs together in one turnkey package. “In a nutshell we build customised, controlled environment vertical farms and use our own hardware and software operating system to improve growing efficiencies,” says Prior, who set up Farmony with co-founders Daniel O’Brien and Rodrigo Andrade in November 2018.

The idea for Farmony was O’Brien’s and he spent about 18 months developing the concept before bringing Prior (a friend from college with a marketing background) and business graduate Andrade (a former colleague at the Kerry group) on board. O’Brien’s background is in agriculture and economics and he had seen the start of commercial vertical farms in Asia and the Far East while working abroad.

Potential customers for Farmony include existing and would-be farmers, schools, colleges, community enterprises and even individuals with €1,500 to spare who can produce a steady supply of fresh greens from a mini unit in their own home. Anywhere there’s free space is a potential site and controlled farming environments have been created around the world in many unusual places: from tunnels and disused air raid shelters to vacant car parks.

The growing units are modular so farms can be built to any size. A fully kitted out facility, roughly the size of two 40ft (12m) containers joined together, would cost in the region of €86,000. “We land the farm in someone’s yard or put it together in an available outbuilding – such as an unused mushroom house – hook it up to the [existing] power and water supply and they are ready to start growing,” Prior says.

“Growers have no problems with weather or seasonality and don’t have to worry about levels of watering or plant nutrition as this is all controlled for them. With our system it’s not the growing that’s the issue. It’s the selling. They need to have thought out their route to market for the volume they’re planning to produce because if they go for micro greens they’d have crops ready for harvesting every 7-10 days. But if they went for something like basil it’s between 21 and 25 days to harvest so it’s less labour intensive.”

With their shiny growing trays, distinctive LED lighting and humans dressed in white coats with gloves and hair coverings, a Farmony unit looks more like a plant factory than a farm. However, high levels of hygiene mean the growing environment can be kept pesticide-free. It’s all very quiet and even a little bit eerie as the low labour requirement means people are thin on the ground. Making everything as automated as possible was a priority for the company so the labour input for a 20-module unit would be 25-30 hours a week between seeding, transplanting, harvesting and cleaning.

While the uniform rows of little green plants are the visible manifestation of the Farmony method, they are just one side of the story. The other is the intelligent monitoring system that’s whirring away in the background and measuring all the key metrics, providing minute-by-minute detail about the crops as they grow so environmental tweaks can be made as needed.

Each grower has an individual farm dashboard that gives them updates on their crops and offers advice on things like workflow planning. The dashboard can also be used to reorder raw materials such as seeds and growing mats.

Farmony’s units can be remotely controlled from anywhere in the world from any network. This is different to most smart technology farm systems that require the user to be closer to home. The company’s platform is open source and can be used over GSM phone networks and any wifi or internet connection. Customers can choose to operate alone with just back-up support from Farmony or they can become part of the interconnected Farmony “family”, which among other things uses aggregated data from growers to help them further improve growing efficiencies and gain insights into crop behaviour.

“In Ireland alone we import around €300 million in fresh produce that we could be growing here given the right conditions,” Prior says. “With our solution this produce could be grown locally all year round, creating jobs and reducing food miles. There is no reason why Ireland can’t become self-sufficient in leafy greens, herbs and micro greens.”

Investment in the business has been about €250,000 so far with support coming from the Department of Agriculture, Fingal Local Enterprise Office and Teagasc. Farmony will make its money from selling hardware and from monthly SaaS subscriptions based on farm size with over-the-air updates and tiered reporting levels available.

In May, Farmony signed a European distribution agreement with the US-based Sananbio, a vertical farming technology company that makes growing modules and horticultural lighting. The plan is for Farmony to start selling its solution across Europe using Sananbio’s equipment and it has already opened a satellite office in Poland to kick-start the process. The company expects to have about five farms up in running in Ireland by the end of the year and already has one in the US with another to follow and one about to come on stream in the UK.