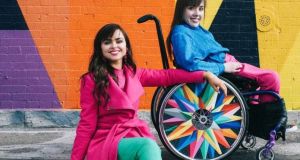 Dr Anita Finnegan, founder of Nova Leah, is among 13 finalists in the main category for the EU Prize for Women innovators, which offers prizes of €100,000 each for the top three winners. This is only the second time an Irish innovator has been selected for the award since the awards launched in 2011.

A spin-out from Dundalk Institute of Technology, the company’s backers include Sure Valley Ventures, Cosimo Ventures and Enterprise Ireland.

“It is an honour to be included on this list of outstanding innovators. These awards provide female entrepreneurs from across Europe a platform for recognition and inclusion, and motivate more women to push themselves forward and turn their ideas into commercial reality,” said Dr Finnegan.

Ailbhe Keane, co- founder and creative director of Izzy Wheels, is among eight finalists for the ‘rising innovator’ category in the same awards, with a prize of €50,000 up for grabs.

Ms Keane, co-founded the company with her sister Izzy in 2015 as a final year college project in the National College of Art and Design. The company produces funky wheelchair covers, with its designs having appeared in leading fashion publications such as Vogue. The two sisters were included in the highly regarded Forbes “30 under 30” list in 2018

The winners are due to be announced in September.

The awards were launched in 2011 to help raise awareness of the need for more female entrepreneurs. Although there are more women than men in Europe, just 16 per cent of start-ups on the continent are founded or co-founded by women and only 6 per cent have all-female founding teams.

The first and only other Irish finalist in the EU Prize for Women Innovators to date is Sarah Bourke, chief executive of spacetech company Skytek, who won third prize in 2016.

Separately, some 15 start-ups have been selected for Health Innovation Hub Ireland’s competition, which is intended to find solutions or services that can be piloted or validated for use in the healthcare sector.

The Health Innovation Hub Ireland, which launched in 2016, is aimed at strengthening collaboration between Irish companies and the public health sector. It provides budding entrepreneurs with an opportunity to carry out pilot and clinical validation studies, while also giving health sector bodies early access to innovative solutions.