How to turn racists’ genetic arguments against them

Every white supremacist has African ancestry, and every Nazi has Jewish heritage 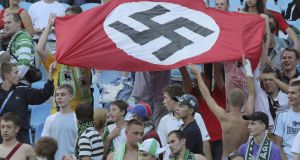 Supporters of Karpaty Lviv hold a Nazi flag at a soccer match against Dynamo Kiev in Kiev in 2007. Photograph: Reuters

It was funny once. The perfectly square bit of dirt on the window. The shocked reactions of Craggy Island’s Chinese community. The local farmer who doesn’t have much time to be a racist, because he just likes to have a cup of tea in the evening. The feckin’ Greeks …

Dermot Morgan’s finest televisual moment – that evocation of Nazi speech-making in front of the greatest window in comedy – is perhaps a little less funny now that prime minsters or presidents of Hungary, Turkey, the United Kingdom and the United States are happy and comfortable to spout racist statements, and not merely get away with it but be applauded for it by their supporters.

How have we reached this point? It’s the very question asked by geneticist and broadcaster Dr Adam Rutherford. He’s the Rutherford in the BBC’s popular radio programme The Curious Cases of Rutherford and Fry, in which he and Dr Hannah Fry try to solve listeners’ scientific queries.

In the case of the resurgence of publicly acceptable racism, Rutherford decided that a radio show was insufficient and that a book would be needed. How to Argue with a Racist is published this week, and Rutherford will be delivering a lecture on the subject during the Northern Ireland Science Festival.

So, how did we get back here? “I find myself asking the same question,” Rutherford says. “I find myself in lectures thinking how strange it is that I’m now talking about this, because these are mostly questions that were parked, in my field – genetics – years ago. Maybe decades ago. And we keep discovering interesting things about evolution and population differences, and migration, and so on, but the question of how race as a concept relates to biological diversity, that ended a while back.

“Having these conversations in the academy is one thing, but as someone who tries to communicate science, to talk about it, as a broadcaster and as a writer, I found I was suddenly having very different conversations. Conversations about race, when we were talking about ancestry … In some ways, science has failed to convey to the public what is correct, and so I want to equip people with what current scientific thinking is, so that when the question comes up, they have the tools to respond. To say, ‘Yes, there hasn’t been a white man in the Olympic 100m final since 1980, but no that’s not because of any lack of African-American ancestry.”

It’s precisely that sort of casual, inauspicious racism that Rutherford looks to quash with his book. The idea that Olympic athletes with African heritage are somehow better because their genes are imbued with extra strength is rubbish, he says. For a kick-off, using athletes as a test sample is a daft idea because anyone with the sort of genetic gifts that allow them to perform at the highest level is a poor sample of what a broader population is like. Beyond that, there’s a simpler rebuttal – if those with African heritage are inherently genetically better at running very quickly than others, then where are the Olympic 100m champions from South America, Europe or elsewhere with populations that can trace heritage to Africa?

Besides, tracing your genetic lineage in that manner, looking for secrets and answers to why you are so underprivileged compared with others, is a nonsense, says Rutherford. “I do think that part of the change in culture – which means I kind of had to write this book – is to do with the rise of nationalism and the more open discussion of race. Certainly there are more open discussions of public racism than at any point I can remember in my lifetime. There are other factors, though, such as the rise in genetic ancestry testing kits. Now, they’re not pernicious in themselves, but I argue that they have fostered a misunderstanding of what genetics means, and specifically in the form of a sort of reversion to essentialism. So a notion that we’re determined by our genes and our ancestry, which as a geneticist I just don’t think are scientifically valid nor verifiable to the extent that people adopt them.

“So, when you take one of these tests and it comes back saying that you’re 10 per cent Swedish, or 15 per cent Irish, these are very broad strokes, that are not scientifically meaningless, but they are of only trivial relevance. But people attribute very great significance to them. For instance, I sometimes talk about the fact that, genetically speaking, there is no such coherent ancestral group as Celts. But try telling that to an audience in Glasgow and see what happens.

“Over in Ireland you’ve got some of the best genetic genealogists in the world, people like Dan Bradley [head of the school of genetics at Trinity College Dublin] who has been tracking the story of the Irish for years, and that’s really important work, it’s important to understand the movement of peoples and the migration of peoples. But they’re always complex. Ancestry is a matted web, not linear family trees.

“The second thing, though, is that if he did exist, he lived in the fourth or fifth century, and that’s a date which comes before the ‘isopoint’, which is the time at which everyone in Europe is descended from everyone else. So if Niall did exist, and if my friend Bill is directly descended from him, then so too am I. And so are you. And so is a guy in southern Italy, and in Turkey, and literally everyone else in Europe. So if you can attach some kind of tribal identity to that, that idea that you’re descended from some fifth-century Irish king, well everyone else is too.”

This is a relatively recent revelation. One that has the power to stun those who claim kinship with any royal lineage, or who might have notions of “racial purity”. The simple, genetic, fact is that your family tree isn’t a neat family tree at all. It’s more like an overgrown shrub, especially the farther back you go. And because everyone else’s is, too, it means that the family shrubs intertwine and merge until, once you go back a surprisingly few generations, we’re all related to everyone else.

Thus the late actor Christopher Lee’s claim to be directly descended from Charlemagne is accurate, but also meaningless. “Not everyone can prove it using family trees. Christopher Lee could, because he was the descendent of an Italian contessa, so they had the paper trail of her family going back. The whole Danny Dyer story, which showed that he was a direct descendent of Edward III, they were able to paper-trail that too, and very few people can actually do that, but I calculated out a mathematical proof that anyone with long-standing English heritage is also 100 per cent descended from Edward III.”

At which point I suggest that we should use our – now undisputed and mathematically proven – royal lineage to, shall we say, take back control, but Rutherford politely declines my invitation to insurrection. The point is, of course, more profound than working out where you stand in line for a throne. It’s the fact that every white supremacist has, if you trace their genetic code back, African ancestry. Every Nazi has Jewish heritage. Every Briton is a mish-mash of European bloodlines.

The problem, of course, is that while all of this science is correct and provable, it’s also useless in the face of racism. As someone once said: You can argue with a racist; you can argue with a Labrador retriever, too, for all the good it will do you.

Rutherford agrees, but says there’s a more important battle, on two fronts, to be fought. “Part of the book discusses actual neo-Nazis and white supremacists, because they are obsessed with genetics. And their misunderstanding of genetics makes them think that they can prove some sort of racial purity, which is a nonsense. Arguing with those guys using science is a demonstration of the old Jonathan Swift maxim that you can’t reason someone out of a position that they didn’t reason themselves into, he says.

“Who I’m really interested in reaching, though, are those who aren’t racists, and who don’t think like that. But because of relying on stereotypes, or myths, or the cultural sphere that says that race is real, or that some factors are biologically encoded and that those factors segregate by race, I want those discussions to be the ones that are informed by science. Because those people aren’t fundamentally racist, so when you’re armed with facts, and you’re armed with a knowledge of history, then I think that is your best route to change. Science is a powerful ally, it’s the best ally we have, I think. But what’s the Bob Dylan line? ‘I know my song well before I start singing.’

“One of the ideas I explore is that scientists need to get more involved. It’s no longer good enough to simply say: ‘Here’s the data and let society decide.’ Racists have no such compunctions, and will use every tool at their disposal to spread their message. So if we. as scientists, sit back and say, ‘Hey, it’s just the data and I don’t know what the political ramifications are, that’s for others to discuss’, then we’re volunteering ourselves to defeat, and for our voices to be silenced in favour of populist, emotive arguments, and that’s the political landscape in which we now live.

“Racism isn’t wrong because it’s drawn from and based on a misunderstanding, or specious scientific ideas. Racism is wrong because it’s an affront to basic human dignity. What I’m saying is, if you want to be a racist, fine, fill your boots, go ahead, but you can’t have my scientific tools, my weapons, to justify your position.”

How to Argue with a Racist by Adam Rutherford is published by Orion. Northern Ireland Science Festival runs February 13th-23rd. nisciencefestival.com