Laser weapons and holograms: What we can expect in next 10 years 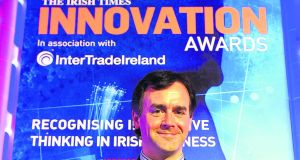 Ivan Coulter from Sigmoid Pharma, winner of the inaugural ‘Innovation of the Year’ Award and also named winner of the Application of R&D Category.

“Innovation . . . is the application of imagination. There are plenty of success stories . . . but that’s the easy pill to swallow. The bitter one is that in the search for innovative ideas come the inevitable failures . . . It’s as much about not fearing failures and having systems in place to spot them early and change direction, as it is about success.”

The 10 years of The Irish Times innovation project have showcased some of the best of Irish innovation. The annual awards are now well established in the national calendar. The awards have identified a series of leading Irish companies who have created imaginative new products and services for the global market.

The key value of the initiative – magazine and awards – has been the sharing of the experiences, both of the good but also of the challenging. It is not just the success stories and how they came about, but also the lessons from those who did not succeed and who have been willing to discuss what happened. Success certainly encourages others to try as well, but failure is invaluable if its lessons are open and shared. By telling the stories, The Irish Times has played a critical national role in nurturing and strengthening the Irish innovation economy over the last 10 years.

Back in 2007, when the Innovation magazine was launched, Steve Jobs dramatically disrupted the global computing industry with the introduction of the iPhone, transforming the public’s perception of what a personal computer could be. Smart devices such as the iPad and Watch followed.

Also 10 years ago, Philippe Horvath demonstrated for the first time that DNA could be manipulated at precise points of a genome using Crisprs, as Francisco Mojica at the University of Alicante had previously theorised. Crispr-based gene engineering has now become an accessible technique worldwide for researchers.

Just over 10 years ago a Carnegie Mellon University team created a breakthrough in vehicle technology when an autonomous car for the first time drove itself long distance, from Pittsburgh to San Diego for 4,500km (2,800 miles). Platoons of self-driving articulated lorries crossed the European continent from various starting points to Rotterdam last year.

Kickstarter was founded in 2009 and has brought a new way for the public to directly fund and take part in innovation.

Back in 2008, Cern started testing its Large Hadron Collider, which led to the discovery of the Higgs boson in 2012, thus deepening our understanding of the universe.

By 2012, almost one third of United States Air Force aircraft were drones, and today autonomous army vehicles, naval ships and submarines are all being built. In 2013, DJI launched its Phantom consumer drone and spawned a new industry in the commercial use of drones.

What then might we expect of the next 10 years?

Electric vehicles will surely become mainstream, and not just for land vehicles. Easyjet has already announced its intent to use a 180-seat electric aircraft within the decade.

Carbon sequestration – the process by which carbon dioxide is removed from the atmosphere and held in solid or liquid form – may become viable, particularly if the generation of electric power itself becomes carbon neutral.

Consumer devices will surely be enhanced by augmented reality imaging and holograms, driven not least by the global spend on advertising and entertainment, including sport.

Alternative approaches to antibiotics will surely come to the fore, breaking the cycle between drug development and evolution of antibiotic-resistant genes.

The Square Kilometer Array and the Thirty Metre Telescope will both surely become operational, transforming astronomy and the understanding of our universe.

Petroleum-based plastic packaging will surely cease, to be replaced with an alternative, perhaps nanocellulose.

All perhaps indulgent musings, based on a 40-year technology career.

While reflecting on a conscious being considering its own demise and a rebirth, Samuel Beckett mused: “Imagination Dead Imagine”. Innovation is indeed the application of imagination, as McAleer wrote back in the inaugural editorial of Innovation magazine. Innovation is the reflection of how things can and should be changed, both demise and rebirth.