Amazon did not cut out the middle man – it replaced him 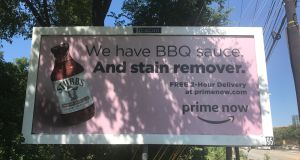 I recently cancelled my Amazon Prime account, a premium monthly subscription service entitling members to free and fast delivery of products purchased as well as access to Amazon’s impressive film, music and literature libraries, etc. I needed a break.

Not for one second do I regret the purchase of my waterproof iPod, my camping tent that can be erected in under five seconds, or my environmentally friendly reusable Nespresso pods. My zeal for conspicuous consumption from the Seattle-based giant isn’t waning but I needed to make it more difficult for my impulses to get the better of me (for now at least).

While my quasi-Veblen purchases may sit comfortably in the “luxury items” section of any Junior Cert economics textbook, Amazon can and will sell you anything you like – from toilet paper to a defibrillator. Its commercial reach knows no bounds.

Increasingly however, it is becoming less of an open marketplace where various brands and manufacturers compete for consumer business. Amazon’s reaction to watching popular third-party products sell like hot cakes? Start making them itself.

This has been going on for some time through AmazonBasics, the own brand offering which initially focused on generic goods like batteries or blank DVDs. However, as Amazon collects and retains more and more data on every other brand and product it sells, it now includes more than 3,000 own brand products.

The online retail giant may claim to have cut out the middle man and driven costs down for the consumer but in reality it has simply replaced him. Consumers are benefiting from some of the economies of scale only a giant such as Amazon could enjoy, but brands and retailers face extinction if current trends continue. Its rapid expansion into everything you can put a price tag on poses the risk of eliminating competition entirely.

Studies vary but it is estimated that somewhere between 40 per cent and 55 per cent of all web shoppers go directly to Amazon for product searches. That being said, the vast majority of all retail sales – in the US anyway – still take place in-store, with the online retail market still only representing around 10 per cent of total retail sales.

Despite the widely-held belief that online shopping will grow significantly in the coming years, the recent acquisition of US high-end grocery chain, Whole Foods, was a brilliant move by Jeff Bezos and Co who aim to take control of the online grocery delivery market long before most competitors have even managed to secure a domain name for themselves.

The Whole Foods deal, worth $13.7 billion (€11.6bn), has been criticised by antitrust lawyers across the US, arguing it will give the online retailer an unbeatable head start in the online grocery delivery market (Walmart is the only competitor doing anything to keep up but is still a long ways behind).

Groceries is just the beginning. While Amazon Fresh will offer delivery services for your bread and milk directly to one’s doorstep, it has also been reported the company will soon provide prescription drug delivery services too.

While the “Amazon Effect” is seen as being most acute in the US, international sales rose by 16 per cent in the first half of 2017, based on the previous year’s figures. Morgan Stanley reported the online giant made up a third of all retail sales growth in the UK and Germany in 2016, and has been busy launching its own fashion brands in Europe.

According to equities chief at AllianceBernstein Global, Mark Phelps, Amazon’s impact can be felt “pretty much anywhere on the planet”. In an interview with the Wall Street Journal, Phelps reinforced the threat posed by Amazon to every brand, manufacturer and retailer standing in its way. “If you are a retailer and Amazon comes into your area of operation, you will lose sales,” he said.

In the online search engine space, Google managed to capitalise on the market’s immaturity through rapid consolidation of power and, to be fair, maintaining a commitment to innovation, which helped it provide better, more reliable information than its competitors. Amazon is attempting to monopolise a far broader and diverse sector: retail sales – complete with its own set of variables and historical nuances. No one seems to be bothered by the fact that one private company gets to decide what information we have access to on the world wide web. Will anyone care if the same applies to online shopping too?