Government urged to do more to support social entrepreneurs

CPA head says 40,000 new jobs and an additional €2bn in GDP could be generated 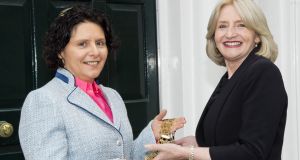 Irish social entrepreneurs are losing out on EU funding because of a lack of coherent Government policy, the new president of the Institute of Certified Public Accountants Ireland has said.

Deirdre Kiely, who recently replaced Nano Brennan as head of the professional body, said as many as 40,000 new jobs and an additional €2 billion in GDP could be generated by social enterprise activity if the Government followed through on its promise to help promote the sector.

Ms Kiely is a qualified accountant, barrister and principal of Kiely & Co Accountants and Business Advisers. She also has extensive experience in the charities and not-for-profit sector and is a board member of the Social Finance Foundation, which provides funding for community enterprise projects.

According to Ms Kiely, social enterprise is already responsible for at least 25,000 jobs and €1.4 billion in economic activity in Ireland. However, she warned a lack of support was hampering efforts to grow the sector.

“Ireland faces massive problems in healthcare, education, social care, the environment and many other areas”, she said.

“These problems are partly the result of enforced cutbacks in public expenditure following the economic collapse of 2008 to 2010. It will take many, many years for spending to be restored but social enterprise could address the issues very quickly if given the opportunity.”

Ms Kiely said a clear legal structure for social enterprise companies, such as the one already in place in Britain, would be hugely helpful in boosting the sector’s fortunes. She also called for joined-up thinking from the Government.

“The EU has flagged plans to increase the total amount for social enterprises and microfinance for Employment and Social Innovation from €193 million to about €1billion under the Employment and Social Innovation programme. But without a coherent Government strategy and structured supports in place, the ability of any social enterprise to secure funds from the EU is severely hampered,” she said.

Nine individuals have been shortlisted for this year’s awards, the winners of which will be announced next week.

The shortlisted entries are: