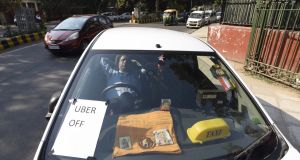 An Uber driver during a strike against withdrawal of driver incentives in New Delhi, India, earlier this year. Photograph: Sonu Mehta/Hindustan Times via Getty Images

Workers in the gig economy have more autonomy to determine when, where and how they work than at any other period in industrial history.

That’s not to say Karl Marx would be jumping up and down celebrating the liberation of the proletariat. In a sector where the rule book is being written in real time, this autonomy in comes at a price: the loss of many hard-won protections for workers, such as guaranteed overtime, and benefits such as insurance or the ability to unionise.

Hundreds of thousands of people across the world have become independent contractors for ride-sharing providers such as Uber and Lyft, which have succeeded in reinventing the steering wheel and with it the traditional business model. Labour had, heretofore, been the biggest cost any business had to account for. However, in keeping drivers’ statuses as independent contractors, they remain their own bosses, despite brandishing the U somewhere on their car to denote their affiliation with Uber. And all this means less labour-related overheads for management.

The available stats on Uber’s popularity are mind-blowing. According to a Wall Street Journal article from 2016, Uber has 160,000 drivers in the US alone and is estimated to be operating out of 54 countries worldwide.

Some estimates put the number of Uber drivers globally somewhere between 500,000 and one million. How has it become such a popular nixer so rapidly? Well notwithstanding the fact that most adults can drive and have access to a car, workers have control over their own hours.

“Various surveys of drivers have shown this to be the biggest attraction to ride-sharing,” says Thomas Kochan, a professor of management, work and employment research, and codirector of the MIT Sloan School of Management.

Peak demand times for ride-sharing services, however, don’t necessarily run parallel with drivers’ own personal schedules and needs. And therein lies the great conundrum for the gig economy: how to balance customer demand with worker supply. “Uber is driven by the incentives gained from keeping as many of its drivers on the road as possible,” says Kochan. “Drivers, on the other hand, are drawn to this kind of work by its flexibility.”

The biggest problem Kochan has with Uber is its failure to communicate more openly with its drivers. “Uber controls all the real-time data in terms of where and when drivers are needed,” he says.

“If the drivers knew where the maximum demand would be in advance, they could determine what their own schedules might allow for and thus tailor their shifts to fit the surge in demand.

The drivers who have multiple apps on their phones – Uber, Lyft, and Austin-based Fasten, are able to maximise their incomes through their ability to see who is offering the best opportunities at any given time. “If drivers had more information at their disposal, it might create greater stability,” he stresses. “Right now there’s simply not enough competition for Uber or Lyft. Uber still has the vast majority of customers. So what’s crucial is getting customers to use multiple apps.”

Certain times of the day are always busy for traffic – morning and evening rush hour, for example. Then you have events, sports games or music concerts, which are also certain to create more demand for taxis, cabs and ride-shares. But it’s no exact science, even though the technology already available to collect real-time data on demand surges is.

“If there’s unexpected surges on an evening when drivers planned to stop working at 6pm, but then the weather changes at 5.30pm and it begins to rain, then you will likely see an unexpected surge in demand that could have been accounted for before actually taking place if Uber simply shared their weather forecasting info and surge-location data with its drivers earlier that day. That’s where they use psychological tricks in order to try and convince its drivers to stay out a little bit longer, with messages like, ‘Are you sure you want to get off now?’

Behavioral economics and psychology say if you create a positive nudge in a direction to opt into an opportunity, you’re going to get some uptake, but it needs to be structured in a negative way. In other words, it is more effective to inform a driver how much they will lose if they stop working rather than framing it in terms of how much they would gain.

This trick is already well-known but Uber has begun using such tactics in a more structured way. They have reportedly employed hundreds of data and social scientists and experimented with video-game techniques, using graphics and rewards with little or no financial value to steer drivers into working longer than planned during times – and in locations – known to be less profitable for them.

“I don’t necessarily have a problem with Uber using such psychological tactics,” says Kochan. “My problem is with drivers not having access to more info. My concern is that Uber are using the info on demand to maximise the company’s income relative to the drivers’. They need to be more straightforward, communicate to drivers on an ongoing basis and incentivise them to work longer hours by sharing with them more of the spoils.”

Kochan makes reference to labour history. “In the past, when we had strong unions, if someone was expected to work overtime, they were compensated accordingly.

Most of the drivers are doing the job for its flexible schedule. However, full-time Uber drivers don’t enjoy such luxuries.

“They’re doing it because they value its flexibility – but Uber have taken that out by saying ‘We really need you to work more but we’re not recompensing you accordingly’. Workers are losing the one thing they liked about the job but our laws are outdated and don’t fit this contracting segment of the economy.”

What needs to happen, says Kochan, is for the market to open up so that there are more alternatives to Uber. When Uber and Lyft were given the boot from Austin, Texas, last year after a referendum upheld a proposal that ride-sharing become more highly regulated by the local government, the vacuum that was left behind in a city with abysmal public-transport options wasn’t long being filled. Fasten was one such alternative to emerge. It offers a better deal to its drivers with fixed fees for any ride instead of simply a percentage of the fare.

“It’s definitely healthy to see alternatives to Uber come into the market, so that we may test whether one model can create a better deal for customers and companies investing in this business than others. There is definitely room for alternative models. Despite what some people say, nothing in the tech is suggesting it has to be one way or another.”