It’s not just Obama and Sanders. Irish politicians, too, are using crowdfunding to raise campaign funds 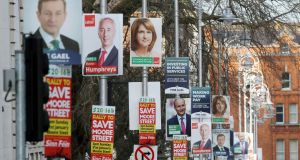 Crowdfunding may be more commonly associated with the latest innovations and technology – or indeed cat cafes – but it has also been used to good effect to raise money to fund political campaigns.

In the US, political machines have proven themselves to be particularly adept at it. While it was pioneered by outgoing president Barack Obama, his putative successor, Bernie Sanders, has of late shown himself to be no slouch either when it comes to raising money from the “crowd”. He has mobilised his campaign to win the Democrat candidacy in the upcoming presidential election by tapping not big corporate donors, but thousands of smaller ones, allowing supporters to contribute between $15 and $1,000 via his website.

Here in Ireland, political crowdfunding is still new, but there have been some notable successes, such as last year’s “Yes” campaign in the marriage equality referendum. This raised €100,000 from almost 1,500 people via global crowdfunding giant Indiegogo.

While not yet widespread in Ireland, the run-up to this election has shown that it has become an increasingly useful way for candidates, particularly Independents or those in smaller parties, to raise funds to buy the posters, leaflets and badges they need to run a campaign in the general election. So how is it working out for them?

Having left the party machine behind, Power says it’s a challenge to raise the money for a campaign, which she expects will cost about €30,000.

“It’s far harder being an Independent from two perspectives: you don’t have a party organisation to rely on and parties have multimillion euro war-chests ready to go,” she says, adding that she hopes that crowdfunding, as well as traditional events such as table quizzes, etc, and a personal loan, will help to fill the gap.

“The objective is to pick up small bits of funding from lots of different sources,” she says. “Organising events takes a lot of effort; crowdfunding is the easiest way of raising money.”

Another plus is that it’s also very transparent, so “everyone can see what you’ve raised”, she says.

And Power is not the only one hoping to emulate the success of their American counterparts.

In Sligo-Leitrim, Cllr Declan Bree is also looking to raise funds to run as an Independent, while in Cork, Green candidate Oliver Moran ran a campaign earlier this year looking to raise money to put towards his social media campaign.

Ken Curtin is hoping to take a seat in Cork East for the Social Democrats and is looking to raise money to fund his campaign on Indiegogo.

Back in Dublin, two Anti-Austerity Alliance candidates, Paul Murphy and Sandra Fay, are using Gofundme to raise money to fund their campaigns.

There are those, however, who are close to hitting their targets.

The Anti-Austerity Alliance, for example, which will join forces with People Before Profit for the election, has been effective in mobilising supporters to open their wallets and donate. First-time candidate Sandra Fay is running in Dublin South West and has raised more than €900 from 29 people via her Gofundme page so far, while AAA TD Paul Murphy has elicited donations of almost €2,500 from 112 people on the same platform, edging closer to his €3,000 target every day.

Power is also pleased with how her campaign has gone so far, having raised more than €2,000 with time still left to go.

“I’m delighted at how its working for me. It’s €2,200 I didn’t have two weeks ago,” she says, adding that it allows her to raise funds from around the country.

“I get a lot of supportive messages from people all over Ireland, from Cork, Galway, saying ‘I wish I could support you’ – crowdfunding allows them to do that.”

Indeed, one supporter who donated €30 to Murphy’s campaign explained the reason for his donation: “Wish I had a vote in your constituency.”

Fees to use such platforms can differ, while some may have more of a profile than others, which can influence the decision to pick a particular platform.

But while crowdfunding for a new gadget comes with few restrictions, crowdfunding to run a political campaign involves staying on the right side of the regulations.

Paddy Walsh, secretary of the Standards in Public Office Commission (SPOC), says that the same guidelines that apply to general donations also apply to crowdfunding. This means that individuals can contribute up to €1,000 a year to each politician. As Walsh notes, “If you can find a million people who want to give you €1,000 you can take it from each of them.”

But these million people can’t be just anyone. They must be Irish citizens, which means, for example, that many of the Irish diaspora may be in a position to fund campaigns if they so wish. And another limit also applies. A contribution of up to €100 does not require a donor to be disclosed – but breach that threshold and you must provide your name and address.

In theory, anonymous donations over this limit should be returned to the SPOC, but as Walsh notes, “it’s a long time since we got anything.”

“Once upon a time someone tested someone else, but that person wisely sent it on,” he recalls.

And, donations in excess of €600 must be disclosed to the commission in an annual donation statement, so donors in excess of this figure should be aware that their names may be made public.

So crowdfunding requires a certain amount of housekeeping to ensure that the candidate, who bears responsibility for donations, does not commit an offense.

What if the money isn’t spent?

So, as Walsh notes, some candidates, depending on what they raised via crowdfunding and other sources, and how much they spent, could turn a profit (albeit an unlikely one) on their campaign. While this money must be lodged to a political donations bank account, if the person isn’t actually elected, there is no requirement to file formal statements.

“It’s a bit of an anomaly,” says Walsh, laughing, “they could spend it on their groceries.”