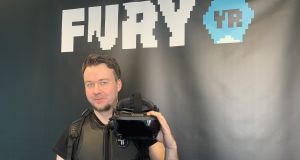 Computer scientist Damien Mac Namara: ‘I always felt the next evolution in gaming centres had to be virtual reality where players were ‘in’ the game.’

Computer scientist Dr Damien Mac Namara is the founder of Fury VR gaming centre and the creator of the recently launched hyper reality experience game, The Ascent. “The Ascent does something no other commercially available game does,” Mac Namara says.

“It offers connectivity to external devices to incorporate hyper reality. The game is specifically tailored to work with special haptic suits so the player feels the impact of touch of the projectile weaponry.”

Mac Namara says his game solves the problem of VR immersion by bringing the real physical world environment into the virtual. “I always felt the next evolution in gaming centres had to be virtual reality where players were ‘in’ the game and not just looking at it on a monitor,” he says.

“We had started off in business offering virtual reality experiences to the public and corporates. However, as a software developer I really felt there was an opportunity to develop these experiences further. About two years ago I saw an opening in the hyper reality VR market where players not only see but also feel their virtual environment. With the support of Limerick Local Enterprise Office, we developed and soft-launched The Ascent as our flagship hyper reality experience in January of this year.”

Mac Namara set up Fury VR in 2016 and the company employs four people. The Ascent cost roughly €80,000 to develop and its market is global. It will be bought by leisure providers and existing VR arcades and is aimed at age 12 upwards.

“The product is disruptive because it modularises a premium hyper reality experience and makes it quite affordable for those who want to offer the experience to their customers,” Mac Namara says.

Fury VR is charging €1,000 per copy of The Ascent which puts it at the top end in terms of pricing for a commercial game. However, Mac Namara points out that similar types of experiences from other providers are significantly more expensive.

“At €1,000 it’s affordable for a lot more customers,” he says. “The cost of setting up five players between the hardware and software required for The Ascent is approximately €35,000 assuming a customer doesn’t already have equipment. With other commercially available experiences the cost can run up to €200,000. Our aim is to become a fully fledged software company so we won’t be selling the hardware, but we will help people to source it.”

Mac Namara graduated with a PhD in UX (user experience) from Limerick Institute of Technology and Fury VR is his second start-up. “My first business was a small chain of gaming centres where gamers played together locally. This type of business model eventually faded away when better broadband arrived but I learned a lot of from the experience,” says Mac Namara, who spent the next few years lecturing in computer science at DkIT (Dundalk Institute of Technology) and NCI (National College of Ireland) before setting up Fury VR.

“When I was teaching, I wrote a sci-fi novel called Furious Angels and that brought the idea of VR back into my mind. I decided then that I had to pursue it as soon as the book was finished,” he says.

“I really felt that VR could do better and while there are some great AAA quality games in VR, the pinnacle is a wireless-free roaming experience where you can feel the impact of touch, the ground shake beneath your feet and the air rush above your head. I suppose this kind of experience was inspired by the well-known ‘holodeck’ from Star Trek that I grew up watching.”

So far, the company has received more than 30 expressions of interest from potential customers across Europe, Australia and the US. However, with everyone holding their breath during the coronavirus crisis, the interest has not yet converted into sales.