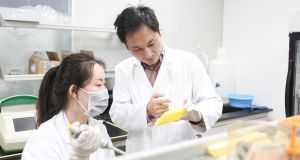 He Jiankui guides a laboratory staff member at the Direct Genomics lab in Shenzhen, China. The scientist has claimed to have created the world’s first gene-edited twin baby girls, ‘Lulu’ and ‘Nana’, whose genetic alterations could make them immune to HIV. Photograph: VCG via Getty Images

News that Chinese scientist He Jiankui successfully applied new gene-editing technology to create genetically modified human embryos immune to the HIV virus conjures up feelings that have lay dormant for what seems like decades. The kind of dystopian fears which emerge after science pushes the limits of its own ethical boundaries have been markedly absent in the mainstream media of late.

But, if it turns out to be true, many will deem the experiment to be an historic scientific achievement, comparable to the birth of Louise Brown, the first baby created through in vitro fertilisation (IVF) in 1978.

It’s rare that one individual scientist gets to be the protagonist/antagonist in a major scientific news story, too. Usually when some new innovation that goes public is somehow deemed unethical, it is the “scientific community” at large who are labelled irresponsible.

He, from the Southern University of Science and Technology in Shenzhen, China, has had no such luck. His international peers, gathering this week in Hong Kong for the Second International Summit on Human Genome Editing are distancing themselves from him, preferring to accuse their colleague of “going rogue” and breaking from the global medical consensus that while the “so-called” CRISPR gene-editing technology he used was theoretically capable of human genetic editing, it was not to be applied in this way . . . not yet, anyway.

He is reportedly under investigation by a local Chinese medical ethics board who will determine if the experiment in fact broke any Chinese laws or regulations.

Even his own research institution is washing its hands of him. Southern University of Science and Technology officials issued a statement claiming college authorities were “deeply shocked” upon hearing about He’s experiment, but stressed it must have been conducted elsewhere as the scientist has been on unpaid leave from the university.

Notwithstanding the unusual presence of an individual we can all point our fingers at, there’s a little more culpability to be divvied out before throwing any more stones.

The media have plenty to answer for, too. This research is yet to be peer-reviewed. Rather the story is based upon some videos posted by He on YouTube, as well as documents, notes and manuscripts allegedly penned by the research team involved.

I cannot count the number of times I’ve wanted to run with a science story, the details of which came directly from a researcher who conveniently placed themselves directly at the heart of whatever breakthrough is claimed to have been made. Thankfully, most editors can see me coming a mile away and demand a copy of the journal citing details of any so-called breakthrough so that they can ensure claims have been sufficiently peer-reviewed, scrutinised and ultimately deemed credible enough to publish.

So while the “two beautiful little Chinese girls named Lulu and Nana” He claims to have brought into the world cannot be edited out of existence, this story could have been – at least until independent experts had the chance to confirm its veracity. The vast majority of us wouldn’t even be aware of this had responsible media looked for a paper trail.

Responding to the growing attention this story is receiving globally, Dr Jennifer Doudna, a professor of chemistry and molecular & cell biology at UC Berkeley and co-inventor of the CRISPR-Cas9 genome editing technology allegedly used by He, issued a statement this week. It happens to be a wonderfully succinct and pro-active piece of prose showing ethical and thought leadership around a subject wrought with thorny brambles.

“It is imperative that the scientists responsible for this work fully explain their break from the global consensus that application of CRISPR-Cas9 for human germline editing should not proceed at the present time. It is important for the public to consider the following points:

“1. The clinical report has not been published in the peer-reviewed scientific literature.

“2. Because the data have not been peer-reviewed, the fidelity of the gene-editing process cannot be evaluated.

“3. The work as described to date reinforces the urgent need to confine the use of gene editing in human embryos to cases where a clear unmet medical need exists, and where no other medical approach is a viable option, as recommended by the National Academy of Sciences.”

Doudna then goes on to stress how news stories such as this should not be allowed to detract from the “many important clinical efforts to use CRISPR technology to treat and cure disease in adults and in children” .

Too late for that, I’d say.