Beware zealots across all platforms

John Holden: Tech and organised religion may seem world’s apart but they have one thing in common: both are taken way too seriously 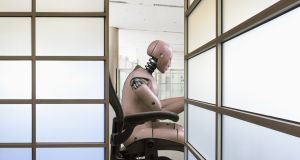 Master of all s/he surveys?

I was 15 when I began questioning my faith in Catholicism. Around that time I signed up for a North/South reconciliation initiative in my school where Catholic and Protestant kids from each side of the Border were paired up over two weekends. Both kids got the chance to see how the other half lived in anticipation that we’d all come out the other end more well-rounded and empathetic young men.

From an early age, I had a uniquely healthy scepticism towards the idea of “national” identities and cultural boundaries generally. So that part of the social experiment didn’t faze me. Knowingly surrounding myself with people who questioned the one “true” Catholic faith, however, wasn’t going to be easy for 15-year-old me. I remember deciding to use Christianity’s “get out of jail” card and simply have “faith” that I would not only survive my time among heathens, but come out more pious than ever.

My blind faith proved successful until the day it was truly tested, through attendance at my first Protestant mass in Belfast in 1996. Much to my dismay and confusion, I found myself agreeing with many of the “edits” Protestantism had made to Catholicism in an attempt to modernise parts that were no longer fit for purpose.

Society now appears to be grappling, not only with social and religious hangovers, but with the risks posed by technological progress left unchecked. And “blind faith” is the philosophy most widely adopted by those believing technology can only lead to good. The mob mentality surrounding “tech zeal” makes it increasingly difficult to stop and ask how.

This question is being asked outside tech circles though. The Irish Times’s Breda O’Brien used her recent column to raise concerns over the threat posed by Artificial Intelligence (AI) to the long-term job security of workers lacking the kind of technical expertise needed to survive in the digital age.

At first glance, I was pleasantly surprised to see O’Brien venturing into the esoteric world of tech. But the veteran columnist made a rookie mistake.

The dystopian future AI is supposedly going to inflict upon millions of unskilled workers in the not too distant future, according to O’Brien’s research sources, must be seen within the wider context of technology reporting: perhaps a subject more susceptible to groundless speculation and dubious data than any other.

In tech we routinely hypothesise as to how things might look 50 or 100 years from now.

Commentators enjoy the freedom to say whatever they like because no one will be around to call out inaccuracies or sensationalism by the time any bleak future they speak of becomes the present.

And for every report claiming robots will have usurped half the positions currently held by humans in 50 years, there are two more suggesting AI progress is still incredibly slow, and in many cases the innovation inept, so its impact on labour trends will be very gradual and far less dramatic than many believe.

These reports tend to receive less attention than the ones which conjure up Terminator-style post-apocalyptic futures.

A recent Oxford study of the hundreds of “bots” designed and used by engineers across the globe to automatically edit Wikipedia articles revealed how their behaviour not only mimicked their human editors’ positive academic traits, but also their biases and stupidities.

Each bot supposedly shares a common aim of making the information contained in the encyclopedia more reliable. Collectively, however, their behaviour is not only stupid but, sadly, all too familiar.

With no central management system in place, the study found, among other things, pairs of bots which have been routinely rewriting each other’s edits for years. Lacking cognition, the robots didn’t notice. But neither did their human designers.

They also found differences between Wikipedia in different languages. German Wikipedia was found to be more productive and efficient than Portuguese Wikipedia. I’ll let readers draw their own jingoistic conclusions from that one.

The point is this: robots are supposed to be speeding up and simplifying various processes heretofore carried out by humans. Instead, human engineering still appears to be governed by “The Max Power” way of thinking (Simpsons reference). If there is a “right” way and a “wrong” way to do things, the “Max Power” way could be defined as the wrong way but faster.