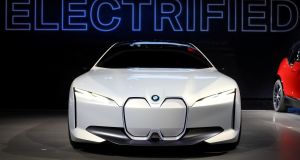 The BMW all-electric i Vision Dynamics concept car: the supply of battery metals is coming under greater scrutiny as electric car sales are up 63 per cent in the third quarter from a year earlier. Photograph: Reuters

As the world’s largest car companies focus on producing more electric vehicles, they are facing greater scrutiny about the ethical and environmental effects of their supply chains.

From battery metals such as cobalt to the industrial commodities of aluminium and copper, the market is starting to pay a premium for sustainable and traceable metals.

Such a development may well prompt a permanent price divergence across commodity markets, with higher prices for low-carbon products as well as highly processed forms of metal for electric-car batteries.

The London Metal Exchange, the world’s largest metals exchange, says it is working on new contracts that reflect a likely premium in price for battery metals.

Last week, 10 of the world’s leading carmakers including BMW and Volkswagen met in Brussels and pledged to address the ethical and environmental issues around their use of raw materials.

“If you say as a sector we want to move in that direction the suppliers will start integrating that criteria into their processes,” says Stefan Crets of the CSR Europe business network, which helped convene the meeting.

Norwegian aluminium company Norsk Hydro last week launched two low-carbon metal products, which they will sell at a premium. One has a maximum of 4kg of CO2 per kilogramme, covering all emissions from the mining of raw material bauxite to alumina refining to the production of the final aluminium. The other has a minimum recycled content of 75 per cent. Both are made from hydropower, says the company.

Chile’s state-owned copper company Codelco, the largest producer of the metal in the world, also says it will start pricing copper in a way that takes into account its environmental and ethical footprint.

The move parallels China’s efforts to clamp down on polluting commodity producers. That has been marked by campaigns to cut air pollution in big cities this winter and crackdowns on illegal aluminium capacity that has rippled out across the entire commodity value chain.

The environmental clampdown has helped boost aluminium prices more than 24 per cent year to date. Pressure to be more efficient and reduce emissions has also caused steelmakers to favour higher-grade iron ore. The spread between high-grade and low-grade iron ore has widened to more than $20 a tonne this year, from between $5 to $8 a tonne 18 months ago.

Australian lower-grade iron ore producer Fortescue said last week it would shift its production to high-quality iron ore. Its shares have fallen 23 per cent this year, compared with a 19 per cent rise in shares of Rio Tinto, which produces higher-grade ore.

“There’s been a shift to higher quality across the board,” according to Colin Hamilton, an analyst at BMO Capital Markets. “When you’re being monitored every day you will pay to have better-quality raw materials.”

Supply of battery metals is coming under greater scrutiny as electric car sales are up 63 per cent in the third quarter from a year earlier, with half of the sales coming from China, according to Bloomberg New Energy Finance.

More than half of the world’s cobalt comes from the Democratic Republic of Congo, where up to one-fifth is mined by hand, by children in some cases, according to Amnesty International.

Miners who can prove a clean and traceable supply chain may begin to get more aggressive on pricing, according to traders.

This year the difference between cobalt hydroxide that was from “clean” sources such as large mining companies and untraceable sources was on average 4 to 6 per cent, according to Benchmark Mineral Intelligence.

Last month, Volkswagen launched a tender seeking a minimum of five years supply of cobalt. “A secure and sustainable supply of raw materials for the Li-ion [lithium ion] battery will be the key factor to become e-mobility market leader,” it said.

Pricing is also diverging in nickel, whose dominant use is in stainless steel, but electric vehicle batteries can only use a high purity form of the metal, called Class 1, which is used to produce nickel sulphate. Only half of the world’s nickel is suitable for batteries, according to Brazilian miner Vale.

That has caused nickel sulphate to trade at a premium of up to 35 per cent to the London Metal Exchange price of nickel, according to consultancy McKinsey.

The consultancy expects nickel demand from the battery industry to increase more than 10 times by 2025 to 570,000 tonnes.

“The global nickel industry may enter a period of change driven by a shift in end-use demand and the emergence of two distinct markets,” McKinsey says.