O’Dwyer has spent eight years at the helm 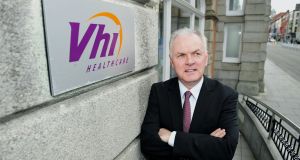 John O’Dwyer, chief executive of VHI, is to step down.

Health insurer VHI is on the hunt for a new chief executive after current head John O’Dwyer said he would step down next year.

Mr O’Dwyer has led the company for eight years. The recruitment process for his successor is now underway.

“John has been an excellent leader of VHI. Since his appointment in 2012, he has successfully steered the organisation through some of the most significant changes in its history, leaving a well-financed, transformed company with a culture relentlessly focused on meeting our customers’ healthcare needs. He leaves us a company that is very well placed to meet the challenges that inevitably lie ahead,” said Paul O’Flaherty, chairman designate of VHI.

Mr O’Dwyer has a long history with the company, starting work with VHI at 17 years-old and rising through the ranks. He left the company to work in senior international roles with BUPA, Friends First and Achmea, before returning to VHI in 2012.

Under Mr O’Dwyer, VHI was authorised by the Central Bank of Ireland, which was considered a major milestone for the company.

“During his tenure, John oversaw the development and implementation of a long-term strategic business plan, which firstly stabilised the organisation and then positioned it for a return to growth and renewed financial strength,” Mr O’Flaherty said. “The Board of VHI is acutely aware of the challenges that Ireland faces as we seek to navigate the uncertainties of living with Covid-19. These challenges will be among those to be addressed by a new CEO who we plan to identify through a formal recruitment process over the coming months.”