Strong first half puts Uniphar on track for 2019 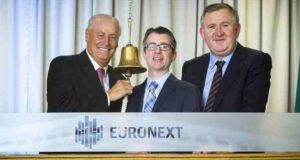 Acquisitive medical supplies group Uniphar has reported strong maiden results as a listed company, with a 20 per cent rise in sales.

Profits before tax in the first half of the year more than doubled to €13.8 million before exceptionals, from €5 million in the same period last year.

The company reported €2.2 million in exceptional costs. The bulk of that, €1.8 million, was attributed to costs associated with previous acquisitions and €300,000 to redundancy payments stemming from those deals.

Chief executive Ger Rabbette said the results reflected “a very strong performance for the first six months of 2019”. He said it was in line with the company’s expectations are position it to deliver on its full-year targets.

“We are on a firm footing for the second half of the year, going into 2020, and the next stage of our planned development in delivering our five-year strategy,” he said.

Uniphar raised €139 million in July when it floated on the junior stock markets in London and Dublin. The company moved immediately to use some of that money to purchase Durbin, a leading supplier of specialist medicines,

“The successful IPO of Uniphar in July provides a platform for a steady growth trajectory,” said Mr Rabbette. “And our subsequent acquisition of Durbin positions us well to become a global leader in the provision of product access solutions.”

Uniphar is increasingly focusing on the high-margin specialty pharmaceuticals distribution in this product access division. It said that, along with its commercial and clinical division, which undertakes sales, marketing and distribution for drug manufacturers on an outsourced basis, product access continues to be the key growth engine for the group, especially in the British market and in Europe where it is active in the Benelux countries.

Its Irish-focused supply chain and retail business, which serves Irish pharmacies, enjoyed strong volume growth, said the company, although this is a low-margin business.

Earnings before interest, tax, depreciation and amortisation rose 119 per cent to €21.9 million on sales of €800.5 million.

Adjusted earnings per share were 9.3 cent for the six month period, showing growth of 157 per cent year on year. Net bank debt was €161 million at the period.

Company broker Davy, which rates Uniphar as an outperform, said the integration of Durbin was progressing better than expected.

“We see numerous catalysts to drive a material re-rating of the share,” said Davy, adding that it expected to see more acquisitions in the second half of the year.