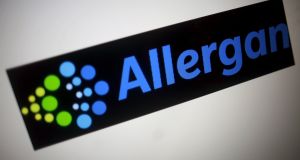 New accounts filed by Forest Laboratories Holdings Ltd disclose the scale of the dividend payout across a number of payments in 2018. Photograph: Thomas White/Reuters

A Dublin-based subsidiary of the Irish-domiciled maker of Botox, Allergan, last year paid out dividends of $7 billion (€6.33 billion).

New accounts filed by Forest Laboratories Holdings Ltd disclose the scale of the dividend payout across a number of payments in 2018.

The directors’ report states that a $6 billon dividend was paid out in August of last year and three further dividends were paid out totalling $1.085 billion during the year – $715 million, $180 million and $190 million.

The firm – which has its registered office at Clonshaugh Business and Technology Park in Dublin – recorded a 41 per cent increase pre-tax profits last year to $935.35 million.

This followed a 17 per cent rise in revenues to $1.65 billion. The directors state that “sales to the market of mature products remained strong throughout the year under review”.

A note attached to the accounts states that “the company is managed and controlled in Bermuda. No charge to Irish corporation tax arises as the company is not resident in Ireland for tax purposes and did not have any Irish source income.”

Separate accounts for a connected firm in the Allergan group, Allergen Botox Unlimited Company, show that in March of this year, the firm declared a dividend of $1.18 billion to its parent, Allergan Pharmaceuticals Holdings (Ireland) Unlimited Company.