Revenue up 9% at Fusion Antibodies despite pandemic 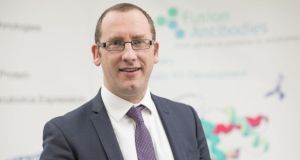 Revenue at Belfast biotech company Fusion Antibodies increased by 9 per cent in the six months up to September 30th despite the challenges posed by the Covid-19 pandemic, the company’s interim results show.

Fusion was established in 2001 as a spin-out from Queen’s University. It is a contract research organisation providing a range of antibody engineering services for the development of antibodies for both therapeutic drug and diagnostic applications.

The results posted by the company on Friday covered a period entirely dominated by the pandemic, but this, it said, created “unusual patterns” in customer needs as businesses adapted their working practices and their research priorities.

“This has established opportunities for the company to provide additional services to some customers, which has balanced out certain projects that have been delayed or paused by other customers,” it said in terms of its operations.

The gross profit margin of 46 per cent was up on the 42 per cent in the same period the year before, and was similar to that achieved for the previous full year. The board did not recommend the payment of a dividend.

The company said it continued to recruit and train scientists, but there were “added costs” arising from adjustments to working practices and higher consumable costs as a result of Covid-19 restrictions.

Cash used in operations was up to £730,000 from £550,000. This included planned investment of funds in R&D as well as increased working capital requirements.

The company said it expects to increase consumable stocks further to mitigate against supply chain risks from Covid-19 and Brexit.

On Brexit, the directors said the company will maintain unrestricted access to EU markets next year due to its location in Northern Ireland, and that it has the expertise and financial resources to meet the challenges and capitalise on opportunities.

In terms of outlook, the directors said the antibody therapeutic market is continuing to grow, and that Fusion remains in a “strong position to grow and return to profitability” in future years.

Fusion is creating a library to capture the entire human antibody repertoire. In April, it raised £3 million of equity to finance the additional Covid-19 element of the library development.

Fusion chief executive Paul Kerr said the project would be branded as Optimal, and would “produce neutralising antibodies against the virus”.

“We have remained operational throughout changing levels of government restrictions and have taken the steps to sustain the business in the coming months,” he added.

1 Basic income for all: Has the Covid crisis given us a new economic model?
2 Chris Johns: Economies may enjoy ‘roaring twenties’ if ministers learn lessons
3 Wet pub openings fuelled rise in Irish Covid infection rates – report
4 There was no vaccine for Anglo: Why the last crisis was different
5 ‘I don’t need to do any of this. . .I don’t actually need to work.’
6 How long can Government afford to keep State pension age at 66?
7 Career opportunities? The ones that just may knock
8 Direct sea routes to Europe offer certainty in choppy Brexit waters
9 Only way is up for Stripe as valuation skyrockets
10 Profits jump threefold at LinkedIn’s Irish unit to $294.2m
Real news has value SUBSCRIBE