Profits and revenues down at Alcon’s Cork-based Irish division 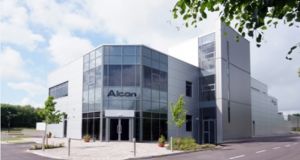 The Irish division of eyecare business Alcon, which last year marked 25 years in Cork, saw profits and turnover decline in 2016 after incurring big costs as it boosts manufacturing capacity locally.

The Cork plant was established in 1991 with just 13 employees. Acquired by Alcon in 2000 it now employs close to 400 people. All its product is sold to its parent company, which is ultimately owned by the Swiss pharma giant Novartis.

Turnover declined in part because of a reduction in intercompany income. Operating profit, which also declined to €2.7 million from €3.9 million, was lower due to an increase in R&D expenditure from €549,000 to €1.3 million.

Alcon Ireland said it spent €9.2 million on developing its manufacturing capacity in Cork last year, up from €5.9 million in 2015.

Quarterly sales at Alcon have declined for nearly two years

Novartis, which is considering either spinning off or selling Alcon, hired Bank of America earlier this year to review its options for the business worth between $25 to $35 billion.

The Swiss giant acquired Alcon from Nestlé for $52 billion in 2010.

1 Javid’s EU divergence plans provoke industry backlash
2 Chris Johns: Ireland risks populist culture war over property and pensions
3 Not everyone ‘feeling full benefits of economic growth’
4 Inbreeding poses major threat to Ireland’s thoroughbred horse sector
5 How to cope with an official audit by the Revenue
6 ‘Life in Vilnius reminds me of Ireland in the 1990s’
7 Big spending election promises and Dublin hotel room taxes
8 Fast-growing frozen food group has a strong appetite for success
9 Help, I’ve no PRSI stamps – can I still get a pension?
10 ‘We stuck our heads in the sand for a long time’
Real news has value SUBSCRIBE