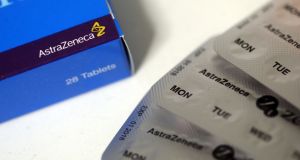 A trial of AstraZeneca’s key immunotherapy drug durvalumab showed it reduced disease progression in lung cancer patients, sending the company’s shares higher and giving it a lead over rivals as it seeks to transform its oncology business.

The trial results are an unexpectedly early boost for the product, known commercially as Imfinzi, which the company hopes will become a blockbuster drug with sales in the billions of dollars.

They set AstraZeneca apart from rivals Merck and Roche, whose equivalent drugs are years behind in the race for similar treatments against lung cancer.

Following the announcement, shares in AstraZeneca extended gains to be up by 9.1 per cent by mid-afternoon on Friday, the top FTSE 100 riser.

AstraZeneca said it was in talks with authorities over plans for regulatory approval for the drug.

“These are highly encouraging results for patients with locally-advanced lung cancer for whom surgery is not an option,” Sean Bohen, executive vice-president for global medicines development at AstraZeneca, said in a statement.

The trial also augured well for another trial of the drug called Mystic, whose results are due in mid-2017. Mystic is testing whether the drug could be used in combination with other treatments in newly-diagnosed cases.

“The surprise early positive readout of the Pacific trial of . . . durvalumab (Imfinzi) in locally-advanced lung cancer is a major inflection point for AstraZeneca’s immuno-oncology,” analysts at Deutsche Bank said in a note.

“In theory, this could open a market opportunity of $1.75 billion (about €1.6 billion) to $3.5 billion (or more) for the drug, which is not included in our current forecasts.”

AstraZeneca is looking to sales of recently launched and experimental cancer medicines to help offset the impact of a loss of patents on blockbusters such as cholesterol pill Crestor.

Durvalumab works by helping the body’s immune cells kill cancer, offering an alternative to chemotherapy. In the Pacific trial, it was used after chemotherapy or radiation therapy.

Analysts at Berenberg said that the trial results put AstraZeneca ahead of rivals Merck and Roche. The results of their trials for similar treatments aren’t expected until September 2019.

They also said the efficacy of durvalumab in Pacific was a good sign ahead of the results of Mystic.

1 Election 2020: Parties' pledges on housing simply don’t add up
2 Britain after Brexit will not be alone, but it will be lonelier
3 Explainer: what is the row about SF’s multinational tax plan?
4 737 Max crisis drags Boeing to first loss since 1997
5 Getting out from under ‘never-ending’ Celtic Tiger debt burden
6 Coronavirus shuts down Starbucks, Toyota and BA
7 EU eyes phasing out smallest euro cent coins
8 Pensions: Estonia plans to unleash a potential €4.85bn on economy
9 Banks withdrawing from ATMs – another failure of regulation
10 It’s getting easier and more profitable to be green
Real news has value SUBSCRIBE