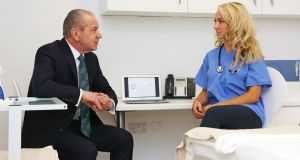 Lord Alan Sugar with Dr Leah Totton. Dr Totton has decided to wait until the outcome of Brexit becomes clearer before opening a clinic in the Republic

Former BBC Apprentice winner Dr Leah Totton is scoping out Dublin to expand her range of clinics but has held off on making a decision because of being “completely in limbo with Brexit”.

Speaking to The Irish Times, Derry native Dr Totton, who last year turned down a £5 million (€5.6 million) offer for the business in which she has a 50 per cent share, noted she had looked “intensively at Dublin” but has decided to wait until the outcome of Brexit becomes clearer before opening a clinic in the Republic.

“I’ve always been quite clear that I will have a presence in Ireland, ” she said, noting that the company has also looked at Belfast.

The clinics offer services such as hair transplants, mole removal and botox.

Dr Totton was speaking in advance of the opening of her newest clinic in London’s Baker Street on Friday. Dr Totton already has two facilities in the UK, based in London’s Moorgate and Loughton in Essex. Later this year she will open her fourth clinic at Canary Wharf in London.

In the five years since, turnover across the clinics has grown to £1.6 million (€1.8 million) and Dr Totton expects that to rise to about £3.2 million (€3.6 million) this year given the size of the Baker Street facility, located in London’s prime medical district: Marylebone.

Revenue from the main Moorgate facility currently makes up the largest portion in the group, Dr Totton said.

Her new two-storey facility on Baker Street will become the group’s flagship clinic.

Here, the State is investigating the options around implementing a ban on under-18s being treated with botox or dermal fillers as part of plans to tighten up regulation of cosmetic procedures.

Dr Totton noted that, in the UK, the cosmetic sector is “completely unregulated, which means it is perfectly legal for a non-medical person with no training whatsoever, to purchase dermal filler online and inject it into someone’s face”.

“The majority of revision cases I see are clients under the age of 25 who have had botched work performed by non-medical professionals on cut-price deals and the outcomes can be devastating. It is a worrying trend,” she said.