BlackBee has spent €39 million on nursing homes recently, including in Cork and Clare 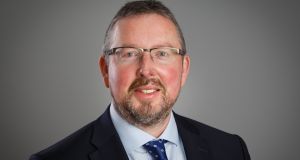 Paul Kingston, who has been appointed healthcare portfolio manager with BlackBee here.

Paul Kingston, the businessman who oversaw the sale of CareChoice nursing homes for €70 million, will lead BlackBee Investments’ drive to expand in the same sector here.

BlackBee has spent €39 million on nursing homes recently, including backing the extension of Cramers Court nursing home in Cork, investing in the Ditchley group of homes and in facilities in Charleville, Co Cork, and Killaloe, Co Clare.

The Cork-based firm has appointed Mr Kingston as healthcare portfolio manager as it focuses on further investment in nursing homes over this year.

Mr Kingston, a chartered accountant, helped found and was chief executive of CareChoice nursing homes, which French group Infravia Capital Partners bought two years ago for a reported €70 million. Before that, he worked as a financial controller.

BlackBee chief executive David O’Shea said Mr Kingston would add to the company’s expertise in healthcare and aid it securing other investments in that sector.

“Paul’s appointment at BlackBee is a very significant hire for the company and marks a pivotal moment for us as it builds on the extremely strong investment foundations already in place here at the company,” Mr O’Shea said.

Mr Kingston described the move as “an exciting opportunity” and said he was delighted to join BlackBee as it began work on a number of healthcare projects.

Last year, BlackBee contributed €39 million to hotel group Inua’s refinancing – where a company borrows cash to repay an existing debt. Half of this came from private individuals, who invested a minimum of €25,000 each, and half from Irish pension funds.

Inua owns the Muckross Park Hotel in Killarney and Kilkenny Hibernian as well as Radissons in Little Island, Co Cork, Limerick and Athlone, Co Westmeath, among other properties.

It is also financing the purchase of an 1,550sq m office in the City Quarter Building on Lapp’s Quay in Cork. BlackBee offers various investments with different levels of risk and returns to clients.

Infravia, the French player that bought Mr Kingston’s last venture, invests mainly in infrastructure. CareChoice has since expanded from six homes at the time the deal was done to nine. It has properties in Cork, Dublin, Meath and Waterford.