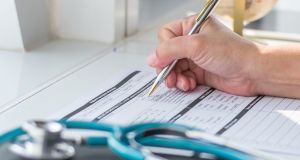 The HIA’s survey found that 44 per cent of the population were covered by private health insurance. Photograph: iStock

Just one in six health insurance policyholders claim they’re likely to switch provider when they next renew their policy, a study commissioned by the Health Insurance Authority (HIA) found.

While low, the survey undertaken by Kantar Millward Brown suggests that the reasons people remain with their current policyholders are positive. The top reasons for staying include having a clear understanding of their current policy, general loyalty and perceived value for money.

Despite loyalty to one provider, policyholders are more inclined to switch to a different plan with that provider with three in 10 suggesting they’d consider making the switch. That becomes more likely among 50-64 year olds.

For those 17 per cent that have switched in the past, evidence of a cheaper policy with the same benefits was cited as a motivation.

“Even though the research highlights that consumers have a preference to remaining with their current insurance provider, we would strongly recommend that consumers actively review their health insurance during their policy renewal period to ensure that they are currently appropriately insured,” said HIA chief executive Don Gallagher.

More broadly, the HIA’s survey found that 44 per cent of the population were covered by private health insurance with coverage higher among those aged over 35. This represents a 1 per cent increase on the HIA’s survey of February 2018.

Main policyholders tend to be the people paying for the insurance of which 83 per cent are male. Employer schemes are in the minority at just 6 per cent.

The HIA’s report was undertaken during the first half of this year and is representative of the profile and spread of urban and rural localities across the country. It found that just one in three people were aware of the HIA.

1 Major credit union plans to limit savings accounts to €40,000
2 Passengers face queuing in car parks at Dublin Airport
3 Woodchester founder Craig McKinney dies
4 Student accommodation sector set for harsh Covid-19 lesson
5 Revenue tells court it was entitled to raise €1.64bn tax assessment against Perrigo
6 Penneys will not reopen on Monday despite expected changes to lockdown rules
7 Ikea among major retailers to reopen next week
8 Brother is dragging his heels as executor of uncle’s will - is there anything I can do?
9 Irish stocks gain on Government’s accelerated reopening plans
10 Bad posture working from home easy to acquire
Real news has value SUBSCRIBE