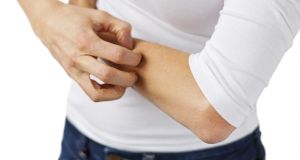 Kymab’s main product is a potential treatment for eczema that is going through clinical trials. Photograph: iStock

One of Dublin-listed life science investment company Malin’s key holdings has signalled it plans to float on the stock market in the US.

Biopharmaceutical company Kymab, in which Malin has an 8 per cent stake, said on Monday that it had previously submitted initial public offering (IPO) filing documents confidentially. The Cambridge, UK-based company’s main product is a potential treatment for eczema that is going through clinical trials.

“The number of shares to be offered and the price range of the proposed offering have not yet been determined,” it said in a statement, without giving a timeline.

Kymab was identified by Malin as one of four “core assets” as its new chairman Ian Curley oversaw a review of the company’s disparate portfolio of investments. The other main assets include stakes in: Poseida Therapeutics, which is developing a treatment for bone marrow cancer; Immunocore, whose key pipeline product is an eye cancer drug; and Viamet, which focuses on antifungal products.

Mr Curley, who took on the role of chairman last July amid a wider overhaul of the company’s board before becoming interim executive chairman in October, signalled last week that he plans to step away from the company as its investments hit important milestones.

Last month, Poseida shelved an initial public offering (IPO) as it raised $142 million (€126 million) in a funding round backed by pharma group Novartis, prompting speculation that it would most likely be sold in the next year rather than floated on the stock market.

1 Can we finally say farewell to the scourge of hot-desking?
2 Why gift a son now if it eats into his tax-free inheritance threshold?
3 Big Four told to outline plans for audit split in UK by October
4 Amazon.com shares top $3,000 for the first time
5 Chris Johns: Economic self-harm is the root of populism
6 Mortgage arrears: Prevention is definitely better than cure
7 Government to avoid ‘cliff-edge’ on Covid-19 payment changes
8 Flights abroad ban could last all summer
9 Court dispute over redevelopment of Setanta Centre may be put on hold
10 Air Canada resumes passenger flights from Ireland
Real news has value SUBSCRIBE