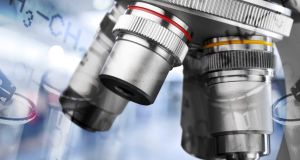 ‘Amryt is now very well-positioned to execute on our strategy of becoming a global leader in the rare and orphan disease space.’ Photograph: iStock

Amryt Pharma, the Dublin-based biopharmaceutical company, grew sales almost 20 per cent in the first nine months of its financial year, helped by significant growth in sales of its drug used to treat people with lipodystrophy, an abnormal distribution of fat in the body.

The company, which focuses on developing treatments to help patients with rare and orphan diseases, said revenue for the nine months to the end of September rose to $113.1 million.

Shares in the company rose 1.25 per cent albeit on very light volume.

Sales of its Myalept drug to treat lipodystrophy, rose 34.7 per cent to $61.7 million in the period, while Lojuxta, a treatment for a condition leading to very high cholesterol levels, saw sales rise 6.5 per cent to $51.1 million.

Amryt completed a transaction to acquire Canada-based Aegerion Pharmaceuticals during the period, a move that grew both its product offering and commercial infrastructure across North America, Europe, the Middle East and Africa (Emea) and Latin America.

The company has launched Myalept in Emea while also looking to significantly grow the presence of Lojuxta in the US.

Amryt is also still enrolling patients in a study for its key in-house development asset, AP101, a potential treatment for a rare hereditary condition, “butterfly skin”, or epidermolysis bullosa, which leads to the blistering of the skin in patients at the slightest touch.

The company has enrolled 203 patients in the Phase III trial and says it is on track to be fully enrolled in the coming months. Amryt is now enrolling infants and children between 21 days and four years of age with EB into the trial.

Amryt secured fast-track designation in October from the US Food and Drugs Administration for the drug.

“The first nine months of 2019 have been momentous and transformational for Amryt,” said Joe Wiley, the company’s chief executive.

“Amryt is now very well-positioned to execute on our strategy of becoming a global leader in the rare and orphan disease space and most importantly, delivering therapies to patients with unmet needs.”

Analyst Andrew Young at Davy said he thinks there are meaningful synergies from the combined entity and an exciting portfolio.