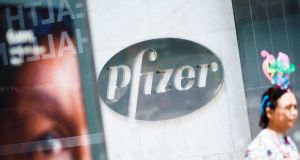 Strong sales of innovative medicines and growth in emerging markets helped Pfizer beat expectations on earnings and revenue in the third quarter, as it spins off its generics and consumer healthcare businesses to focus on branded drugs.

In the third quarter, Pfizer reported non-GAAP earnings per share of 75 cents, compared with the average analyst estimate of 62 cents. Net income rose 87 per cent to $7.7 billion from the same period the year before.

Sales for the core business that remains after the spin-offs were up 9 per cent year-on-year, but sales at Upjohn, its non-branded business, dropped 26 per cent year-on-year primarily because of the loss of exclusivity on Lyrica, a medication for nerve pain, in the US.

Pfizer is in the middle of spinning off its off-patent unit Upjohn and combining it with generics drugmaker Mylan, to create a group that will be valued at about $50 billion. The all-stock merger, announced at the end of July, is intended to allow the core Pfizer to focus on more innovative medicines.

Albert Bourla, the chief executive who took over at the start of the year, said he expected the remaining Pfizer company would be able to deliver revenue and adjusted earnings growth among industry leaders.

“Following the expected close of the Upjohn-Mylan transaction next year, Pfizer RemainCo will be a smaller, science-based company with a singular focus on innovation,” he said.

The US pharmaceutical company said it expected to spend about $7.7 billion-$8.1 billion on adjusted research and development expenses for the full year.

During the first nine months, Pfizer returned $14.9 billion to shareholders in dividends and share repurchases.

Shares in Pfizer, which are down 14 per cent in the past year, were higher by 2.9 per cent to $38.35 in pre-market trading in New York. – Copyright The Financial Times Limited 2019