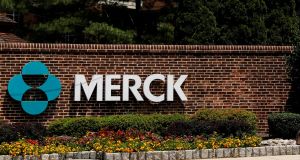 Merck on Tuesday said it expected immunotherapy Keytruda to continue its market dominance as an initial treatment for advanced lung cancer as sales of the drug topped $3 billion (€2.7 billion) in a quarter for the first time, beating lofty Wall Street estimates.

Merck shares rose more than 2 per cent to $84 in early trading.

Keytruda has become the go to treatment for newly diagnosed advanced lung cancer, with eight out of 10 eligible US patients now receiving the therapy. “We still think we are in the early innings of growth for this product,” chief financial officer Robert Davis said in an interview. “In addition to new indications across different tumour types, you also see us moving into earlier lines of therapy.”

Rivals AstraZeneca and Bristol-Myers Squibb have been testing combinations of their cancer drugs in a bid to catch up in first-line advanced lung cancer, the most lucrative oncology market. “While we know it’ll be eventually competitive,” Merck chief commercial officer Franklin Clyburn said, “we feel very confident in our position.”

“What we’re hearing ... in the physician community is that they really believe Keytruda now has established itself as a standard of care in lung,” Clyburn added on a call with analysts and investors.

Keytruda sales in the third quarter surged 62.5 per cent to $3.07 billion, easily topping analysts’ estimates of $2.88 billion, according to data from Refinitiv. Higher demand in China, along with higher prices in the United States, boosted third-quarter sales of Gardasil, the company’s vaccine to prevent cancer caused by human papillomavirus. Merck said it is increasing production from existing plants and commissioned construction of two new facilities for the vaccines. Sales of medicines in China grew by 90 per cent, excluding the impact of a stronger dollar, helping overall revenue grow nearly 15 per cent to $12.40 billion. Analysts had expected sales of $11.64 billion.

Merck earned $1.51 per share, sailing past the average analyst estimate of $1.24.