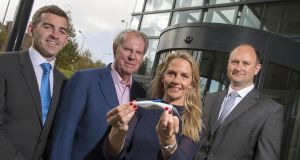 AventaMed, a Cork-based medtech firm focused on simplifying surgical procedures, has secured a €1.8 million investment to enable the company to attain FDA approval and go to market in the United States with its flagship device.

As much as €1.6 million of the fundraising has come through three angel syndicates, which are part of the Halo Business Angel Network (HBan). This is a joint Intertrade Ireland/Enterprise Ireland initiative that serves as a go-between to bring start-ups and investors together.

A spin-out from Cork Institute of Technology’s Medic research centre, AventaMed was established by Olive O’Driscoll and John Vaughan in 2013 to find a method of inserting plastic ear tubes, or “grommets”, in children without requiring general anaesthetic.

Millions of children undergo the procedure to treat ear infections and hearing loss and AventaMed expects its Solo Tympanostomy Tube Device (Solo TTD), which makes it easier to insert the tubes, to have widespread appeal globally.

The five-strong company has spent the last four years developing the all-in-one handheld device which simplifies the implantation process, reduces costs and improves patient outcomes. Having previously obtained European regulatory approval to commercialise the device in Europe, AventaMed is now looking to enter the US market, for which it requires Food and Drug Administration (FDA) clearance.

The three angel syndicates – the HBAN MedTech Syndicate, Boole Investment Syndicate and Irrus Investments – together with Enterprise Ireland and independent angel investors came together for the round, which is HBAN’s largest angel investment to date, both in terms of funding and the number of angels involved.

This is the second time around that the angel syndicates and Enterprise Ireland have backed AventaMed. The company previously raised €1.3 million from the investors in September 2015 to run clinical trials.

The angel funding was led by AventaMed chairman Jack Cashman, who has 30 years of international experience in healthcare, during which he led two healthcare companies to IPOs.