Activist investor loses bid for board seat at Procter and Gamble 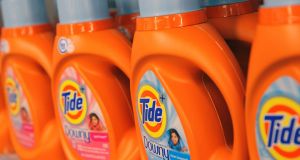 Bottles of Procter and Gamble’s Tide laundry detergent. P&G declared victory in a bid to keep investor Nelson Peltz off its board. Photograph: Andrew Kelly/Reuters

Procter and Gamble declared victory in a bid to keep billionaire investor Nelson Peltz off its board, even as the activist’s hedge fund said the vote is still too close to call.

The world’s largest consumer-products company said all 11 of its directors were elected, based on preliminary results. Minutes later, Mr Peltz’s Trian Fund Management said the outcome will take more time and that it was awaiting certification by an independent inspector.

For P&G, the biggest company ever targeted by an activist in a proxy fight, the result is a vindication of its claim that it’s already tackling the shortcomings called out by Mr Peltz.

The investor argued that P&G suffered from a bloated structure and a lack of new brands favoured by younger shoppers. While he hasn’t called for the replacement of chief executive David Taylor or a breakup of the company, Mr Peltz did suggest reorganising the maker of Tide and Pampers into three largely autonomous units.

“We are encouraged that shareholders recognise P&G is a profoundly different, much stronger, more profitable company than just a few years ago,” the company said in a statement.

The outcome came as bad news to investors, some of whom viewed Mr Peltz as an advocate for their interests. The shares fell as much as 2.5 per cent to $89.86 on Tuesday, marking the biggest intraday decline in about two weeks.

Mr Peltz said he believed the vote margin was plus or minus 1 per cent. No matter what the outcome is, Mr Taylor should put him on the board because so many shareholders voted in his favour, Mr Peltz said.

“Even if they win, which I’m not sure they did, think about what pyrrhic victory it is,” he said in an interview on CNBC. “Everybody but the current employees voted for us. Up and down the line.”

Over the years, P&G has struggled to create as many blockbuster products and overcome an alleged culture of bureaucracy. But Mr Peltz has an outdated view of the company, Mr Taylor said in an interview last month.

Mr Peltz bought a $3.5 billion (€2.9 billion) stake in P&G earlier this year before embarking on the board fight. P&G is only the third proxy fight by Trian since Peltz co-founded the firm in 2005.

The New York hedge fund won two seats on the HJ Heinz board in 2006 and Mr Peltz remained on the board until 2013.