Belfast-based firm has developed Modius, a headband that can help weight management 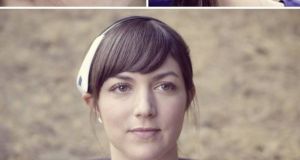 The health tech firm has developed Modius, a headband that stimulates part of your brain that controls fat storage and metabolism, helping boost the latter while decreasing your appetite.

Neurovalens, a Belfast-based tech firm a weight management wearable headband, has raised almost $1.6 million (€1.3 million) in a crowdfunding round.

The start-up, whose backers include TechStart NI, easily surpassed its initial goal of raising $50,000 via Indiegogo to achieve the most successful fund-raising campaign ever run by a Northern Ireland company on the platform. The campaign received backing from more than 4,000 customers across 84 countries.

Neurovalens was established by Dr Jason McKeown and neuroscientist Paul McGeoch in 2015 and was named as Northern Ireland’s best start-up in the Invest NI Propel Programme awards the same year.

The health tech firm has developed Modius, a headband that stimulates part of your brain that controls fat storage and metabolism, helping boost the latter while decreasing your appetite.

The company intends to use the funding to invest in additional research to develop Modius, which has recently started shipping to customers around the world. It is also planning to create 10 new jobs.

“Neurovalens exists to improve lives through neuroscience, and for our first product to receive such an overwhelming response from around the world tells us we have a significant market opportunity, and that people want wearables which actively help them,” said Dr McKeown.

“We see Modius as the first generation of ‘careable technology’, in our case helping people get lean through stimulation of the vestibular nerve - we know we can help adults with weight-loss and weight-management. We think we’re in the early foothills of a neuroscience-led revolution in global health,” he added.

1 Admission of mistake in Oxford vaccine dose raises doubts over reliability
2 Direct sea routes to Europe offer certainty in choppy Brexit waters
3 Promontoria barred from pursuing doctor over Ulster Bank loan
4 Anti-alcohol zeal of public health experts peppers reopening debate
5 ‘I don’t need to do any of this. . .I don’t actually need to work.’
6 Online shoppers face unwelcome tax surprise
7 Fiona Reddan: Who’s afraid of Revolut? Not AIB and BOI it seems
8 ‘Make plans but don’t hold on to them too seriously’
9 Unilever’s Dutch and British arms merge after 90 years ahead of Brexit
10 There was no vaccine for Anglo: Why the last crisis was different
Real news has value SUBSCRIBE