Company racked up losses despite income rising 3% to €429m 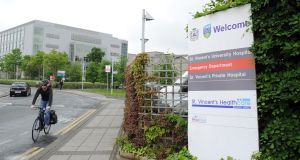 The company behind St Vincent’s University Hospital, St Vincent’s Private Hospital and St Michael’s Hospital recorded the gain after Cushman & Wakefield carried out a revaluation on the assumption the lands could be developed for the “highest and best use”.

Accounts for the 12-month period to the end of December 2017 show the group racked up further losses last year after income from private patients fell. The company’s deficit increased from €3.25 million to €4.6 million in the period.

Income, meanwhile, rose by 3 per cent to over €429 million, almost two-thirds of which, or €271 million, came from HSE funding. Both patient income and “other income” dropped in the year, with the former falling 1.5 per cent to €139.9 million.

Last year the Religious Sisters of Charity announced its intention to relinquish its shareholding and to transfer ownership into a newly formed charitable company. As a result of the change the Sisters can no longer appoint directors. A note in the accounts said: “Upon completion of the transaction the SVHG constitution will be amended to reflect compliance with national and international best practice guidelines on medical ethics, and the laws of the Republic of Ireland. ”

In their review of the accounts the directors noted the company plans to “continue providing high quality healthcare, together with keeping pace with appropriate developments and improvements in medical and clinical healthcare practices”.

Employee numbers across the three hospitals increased by 150 to 3,908 in the year while wage and salary costs rose by 7.5 per cent to almost €225 million.

The company believes the Republic’s ageing demographic will cause a “considerable increase in demand for healthcare and management of chronic illness”.

As a result its infrastructure and equipment assets will need “substantial investment over the next number of years”.

The hospital group made a gain on interest rate swaps of €6.3 million in the year, having made a €2.9 million gain in 2016. It entered into swaps to hedge the group’s exposure to interest rate movements on its financing liability and loans of €128 million relating to the private hospital.

The group’s earnings before interest, taxes, depreciation and amortisation (Ebitda) fell almost 3 per cent to €13.7 million in the year.