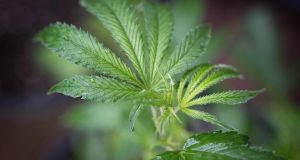 Almost $6.5 billion (€5.6 billion) worth of Tilray shares traded hands on US exchanges on Wednesday, second only to Amazon’s $7.6 billion - a stock almost 47 times the size of Tilray’s $20 billion market valuation

In perhaps the wildest day yet for the nascent legal cannabis trade, shares in Tilray took a ride reminiscent of the Bitcoin craze and even the height of the dot-com bubble.

The cannabis products maker’s share price nearly doubled before wiping out the entire gain in less than an hour, only to finish 40 per cent higher than where it started. Sure, Tesla has delivered some whipsaw sessions and chipmaker AMD has tripled this year, but Wednesday’s moves had a different feel.

“It’s almost like everyone wanted to express their fear and greed through one entity,” Michael Antonelli, an institutional equity sales trader and managing director at Robert W Baird and Co, said. “It’s fun to watch. It’s the wild west right now for cannabis. It isn’t the kind of thing that institutions would touch.”

Almost $6.5 billion (€5.6 billion) worth of Tilray shares traded hands on US exchanges on Wednesday, second only to Amazon’s $7.6 billion - a stock almost 47 times the size of Tilray’s $20 billion market valuation. The cannabis company finished the day bigger than 40 per cent of the companies in the S&P 500.

“The behaviour is very reminiscent of the internet bubble,” said Michael O’Rourke, chief market strategist at Jones Trading Institutional Services. “A nascent industry, a company with what is viewed as first mover advantage, a small float and some media hype is a dangerous recipe for investors.”

Perhaps it’s no coincidence that pot mania comes as the crypto craze is dying off. The broader US stock market has churned higher on the strength of the American economy and surging corporate profits, with gains checked by relentless concerns over trade policy. With riskier markets like emerging equities in the doldrums, any sign there may be a fresh can’t-miss growth story becomes a target for the inevitable knee-jerk exuberance.

So in an otherwise quiet session on Wall Street - the S&P 500 edged higher with investors still on edge over trade - the purveyor of cannabis products dominated attention.

Tilray’s day began with a bang, with the stock higher by more than 40 per cent in premarket trading after the company’s chief executive officer touted plans to explore partnerships with consumer products companies and push into more international markets as marijuana laws ease.

By the market open, noted short seller Citron Research, in a tweet, said it was still betting against the stock, calling the parabolic move “beyond comprehension.” By mid-morning, the stock had notched a 50 per cent rally, taking its advance since the July trading debut past 1,100 per cent.

As Twitter buzzed with pot jokes and incredulous takes on the rally, news hit that a private equity fund backed by billionaire Peter Thiel held 76 per cent of Tilray. Three of the fund’s founders joined him in the billionaire club, at least on paper.

Then things really took off.

Tilray surged another 25 per cent in 15 minutes to touch an intraday high of $300.00 at 2:50 pm in New York - a gain of 94 per cent. Then it cratered, plunging enough in two minutes to trigger an automatic trading halt, a mechanism put in place after the flash crash of 2010 to prevent prices from spiraling out of control before humans have time to sort out whether the moves are justified.

When trading resumed after the prescribed 10-minute break, shares shot higher, tripping another stop. The next resumption led to a plunge and another time out.

Sellers were ready. In minutes, Tilray plunged to $151, wiping out all of the day’s gains and setting off another trading halt shortly before the close. This time the bulls pounced, pushing the stock higher by almost 40 per cent. It ended at $214.06.

“We saw Tesla making some crazy moves a little over a month ago. That was peanuts compared with Tilray,” said Don Selkin, chief market strategist at Newbridge Securities. “ It has nothing to do with the long-term outlook on the industry. It’s a purely technical move.”

The closing flourish that added $63 to the share price took just six minutes.

“It left a sea of bodies, both longs and shorts, behind in its wake,” Dave Lutz, managing director at JonesTrading, said. – Bloomberg