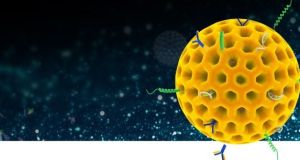 SiSaf has raised more than $12 million to date, of which $7 million has been announced over the last six months.

The company said at the start of June it had closed a $4.3 million (€3.7 million) interim investment.

SiSaf has agreed a commercial arrangement with the British speciality drugs company to allow it to use and further develop its patented bio-courier technology known as ProSilic. As part of the deal, Croda has taken a minority stake in the company.

ProSilic, which is based on a patented hybrid of porous silicon and liposomes, is a transdermal drug delivery system with potential applications in the treatment of skin conditions.

Founded and led by Suzanne Saffie-Siebert, SiSaf has raised more than $12 million to date, of which $7 million has been announced over the last six months. Other backers of the company include Vickers Venture Partners, Invest NI and Innovation Ulster Limited.

“This is more than an investment of capital. It is an investment in our belief that good science equals good business. Our strategic partnership with Croda will turn potential into reality much faster than SiSaf could have achieved alone,” said Dr Saffie-Siebert.

Established in 1925, Croda, which is headquartered in East Yorkshire, employs more than 4,000 people across manufacturing sites and offices in 37 countries.

The company, which has a market value of £5.6 billion, held talks with US peer Ashland Global over a possible merger earlier this year. Croda last week announced a 1.7 per cent rise in pretax profit to £170.8 million for the six months to the end of June, as sales fell by 0.6 per cent to £702.8 million.

“The cultural fit between Croda and SiSaf, with a strong focus on innovation and sustainability, means that this strategic partnership will bring great benefits to our customers and their formulations,” said Dr Nick Challoner, president life sciences at Croda.

“We are hugely excited that through this investment we will be able to exclusively bring this novel, patented technology to our healthcare customers worldwide, enabling them to enhance the performance of their products.” he added.