Mylan to launch HIV self-test kit in the Irish market 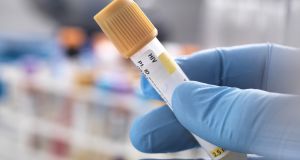 Mylan is the largest manufacturer of HIV Aids medicine in the world, treating around 40% of people with the disease

Global generic drugmaker Mylan will this week launch a HIV self-test kit in the Irish market in the first intervention of its kind to aid early detection of the immunodeficiency virus.

The Pennsylvania, US, company which operates five facilities in Ireland has already launched the kit in other markets, but will this week make the over-the-counter product available in Irish pharmacies.

Until now the test to establish whether a patient has HIV was undertaken in a clinical setting, and while that is still the ultimate recommended course of action, Mylan’s product allows patients test from home, with results coming 15 minutes after testing. The test is similar to a diabetes test where the skin is pricked.

Mylan’s product comes after the number of people diagnosed with HIV in Ireland in 2016 reached a record high at 518 cases. Rates have been rising steadily since 2011, with the rate of new infections increasing significantly within the past three years.

The company’s Autotest VIH product, manufactured in France, will be available in Irish pharmacies this week for around €35. In France, for example, it is understood the pharmaceutical company, which has an $18.4 billion market value, sells around 7,000 units of the product per month.

In response to questioning from The Irish Times at the 22nd International Aids Conference in Amsterdam, The Netherlands, the company’s chief executive Heather Bresch said she expected governments to become more accepting in partnering to encourage this sort of diagnostics test. “It’s cost effective as well as promoting a healthier lifestyle for the patient.”

The test comes amid evidence pointing to higher success dealing with HIV the earlier it is diagnosed. Viral suppression of the disease across Europe is currently around 65 per cent and higher in some countries like the Netherlands. If viral suppression surpasses 90 per cent, the disease could be better controlled, according to a United Nations programme introduced in 2013. According to Mylan’s head of infectious diseases, Anil Soni, that requires the disease being diagnosed at early stage to avoid it spreading.

Mylan is the largest manufacturer of HIV Aids medicine in the world, treating around 40 per cent of people with the disease. Aside from its self-test product the company, along with others, sells pre-exposure prophylaxis in Ireland, a treatment for people at high risk of contracting HIV which lowers the chance of getting infected.

Mylan has been steadily growing its Irish presence over the last three years, up from 1,500 staff in 2015 to over 1,700 today. It has research and development facilities in Dublin, and is the largest employer in the Galway Gaeltacht with its injectable product manufacturing facility in Inverin.