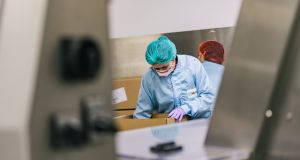 A Mylan worker in one of its Dublin plants. The company is the largest manufacturer of HIV Aids medicine in the world

Generic drugmaker Mylan has called on the Government to boost its efforts in approving biosimilar drugs for use here in a move that could save the State around €140 million a year.

The US/Dutch company with a number of operations in Ireland said some Irish hospitals had already opted to purchase biosimilar medicines, but that the “legislature are lagging behind their own HSE”.

Mylan’s country manager Owen McKeon said Ireland was lagging significantly behind Europe in the take-up of biosimilars where an estimated €1.5 billion in savings have been achieved since 2006, equating to the employment of approximately 40,000 nurses.

“Biosimilar medicines have proved their value to patient care right across Europe for over a decade now. They are playing a key role in providing increased access to and more affordable medicines to patients and national health services. Yet in Ireland we have failed to embrace this change, and are now falling far behind our European colleagues.”

Medicines for Ireland, of which Mr McKeon is chairman, this month noted that the cash-strapped health service was missing out on almost €140 million in savings on its medicines bill by failing to encourage competition by generic drugs.

“We need our policymakers to now implement strategies such as biosimilar quotas or gainsharing schemes to proactively help healthcare professionals and patients make the shift from expensive biologics to more affordable biosimilar medicines,” Mr McKeon said.

“With the prospect of a €600 million deficit facing the HSE this year alone, which will impact on the quality of patient care, we cannot afford to ignore the potential of biosimilars to deliver real savings which can be allocated to HSE frontline service.”

Mylan operates five facilities in Ireland, employing over 1,700 staff. The $18 billion company has research and development facilities in Dublin, and is the largest employer in the Galway Gaeltacht with its injectable product manufacturing facility in Inverin.

The company is the largest manufacturer of HIV Aids medicine in the world and distributes a range of products including epipens, used for the treatment of severe allergic reactions.*

1 Household wealth jumps by 74% since last recession - report
2 Will brother’s widow get half of our parents’ estate when they die?
3 Should I switch bank now with Ulster Bank at risk of closing?
4 EU said to be leaning towards appealing Apple tax decision
5 House insurance: save yourself money by reviewing your policy
6 Facebook unveils €4.7m grant programme for Irish SMEs
7 Banks face ‘hectic’ loan restructuring as payment breaks end, Goodbody warns
8 Finance Ireland refinances mortgages with low level of payment breaks
9 Aldi and Lidl at back of queue during UK pandemic
10 Legal tech company Bundledocs raises €600,000 in funding
Real news has value SUBSCRIBE