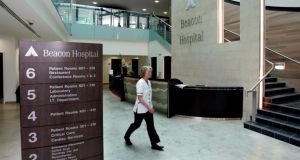 UPMC Beacon Hospital, Sandyford. Like other private hospitals, it has been hit by the declining numbers of people with health cover. Photograph: Matt Kavanagh

The University of Pittsburgh Medical Centre is in talks with its bankers to restructure company borrowings of more than €100 million relating to the UPMC Beacon Hospital Sandyford.

The American private hospital operator, which has revenues of $9 billion a year, is understood to have appointed Deloitte to advise it on negotiations with its principal banker, Ulster Bank.

Accountants BDO are advising Ulster on the ongoing talks, which are believed to be seeking a debt write-down of €20 million to €30 million in order to better position the hospital for the future.

Losses at UPMC Beacon Hospital Sandyford were €9.8 million in 2012 versus €9.7 million in 2011. The group’s not-for-profit parent company is anxious to turn a profit in Ireland but it is held back by legacy debts combined with tough trading conditions in the downturn.

Turnover
UPMC Beacon’s turnover was up 7 per cent to €70.1 million in 2012 versus €65.6 million the previous year. It has five satellite clinics, in Drogheda, Kildare, Mullingar, Waterford and Wexford.

Like other private hospitals UPMC has been hit in Sandyford by the declining numbers of people with health cover and pressure from health insurance companies to reduce fees.

In 2009 UPMC completed a previous restructuring that saw it take control of the hospital from its original founders in return for additional investment.

It now employs 500 people and has 142 beds. It also has the Republic’s biggest private orthopaedic facility, which employs 16 surgeons.

Commitment
UPMC has been repeatedly linked with buying various financially distressed healthcare assets in Ireland but it has yet to make a further commitment to Ireland by buying a major facility. In 2012 it considered buying Waterford’s Whitfield Clinic where it already operates a specialist cancer centre. Loans relating to this hospital are being put up for sale by KPMG the special liquidator of IBRC, the former Anglo Irish Bank.

UPMC was also linked with buying Mount Carmel, a private maternity hospital in south Dublin, but in the end only two local consortiums submitted firm offers for this asset.

CervicalCheck tribunal to be extended due to days of delay

1 How much state pension will I get next year?
2 Am I crazy to consider switching to an Ulster Bank mortgage?
3 PTSB plays down Ulster Bank talk as it sells €1.4bn of loans
4 Irish tech company Asavie acquired by Nasdaq-listed Akamai
5 How long can Government afford to keep State pension age at 66?
6 Avolon appoints Paul Geaney as chief risk officer
7 Disposable income in Ireland rose 28% between 2012 and 2019
8 Wild Geese: From a Macroom farm to the top level at Intel in Oregon
9 Up or down – how much is your Local Property Tax this year?
10 EU bank watchdog may need to revisit payment breaks
Real news has value SUBSCRIBE