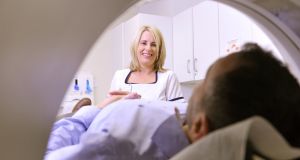 Bon Secours is in the throes of a €150 million investment across its estate including expansion of its clinical facilities in Cork. Photograph: Daragh Mc Sweeney/Provision

Bon Secours Hospital Group – the largest provider of private healthcare in the State – reported a dip in inpatient numbers last year due to a fall in referrals from a State body established to decrease waiting lists in the public system.

Figures for July show the same State body – the National Treatment Purchase Fund – reported that the number of patients on hospital waiting lists was 587,831, down just under 1,600 on June but almost 8,000 more than in July 2017.

In its recently filed accounts Bon Secours said patient numbers fell despite its “ever present willingness to assist the Health Service Executive and public patients in this initiative”.

Responding yesterday, Liam Soylan, chief exective of the National Treatment Purchase Fund said: “I don’t want to be speaking about any particular organisation, but a commercial organisation will always say give us more business. I’m not going to say anyone is offering better or worse value for money in one area but we’re hitting our targets, we’ll use all our funding.”

He said: “it’s not our job to keep the Bons Secours [IN BUSINESS]as much as they might like it to be.”

Meanwhile, the company recorded a 61 per cent drop in profit caused by higher payroll costs, associated with pay restoration, as well as a raft of financial measures.

For the year to the end of December 2017, profit fell to €2.09 million as the group continues through a €150 million investment programme across its estate.

Despite the fall in inpatients, income increased 8.3 per cent as the volume of day case admissions compensated for the declining referrals from the public health system.

The group has hospitals in Cork, Dublin, Galway, Tralee and more recently Limerick following its €14.6 million acquisition of Barrington’s Hospital in 2017. It also has an “elderly care village” in Cork.

Staff costs at the group rose by €12.1 million to €136.6 million in the year while the board of directors and management team of 19 people received compensation of €2.5 million.

At the balance sheet date, Bon Secours had drawn down loan facilities from AIB of €26 million while it also owed Bon Secours Sisters Ireland €3.95 million for leases on buildings in its estate.

The company, which employs over 3,000 people alongside 450 medical consultants, recorded cash in the bank of €8.3 million, considerably lower than the €22.5 million a year previous as it continues its investment programme due to complete in 2020.

That programme is focusing on modernising and expanding facilities and upgrading technology infrastructure. Last year Bon Secours began construction of a €77 expansion of clinical facilities in its Cork Hospital which will raise the number of hospital beds it has to 400. That work is due to be complete in 2019.

It also carried work on new operating theatres and consultant suites in Tralee, a new endoscopy unit in Glasnevin, a new catheterisation lab in Galway and a 33 bed expansion of its elderly care facility in Cork.