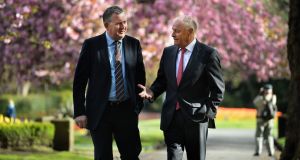 Uniphar agreed to buy Sisk Healthcare for a reported €65 million in April subject to approval from State mergers watchdog the Competition and Consumer Protection Commission (CCPC).

The CCPC said on Friday that it would allow the deal on condition that Uniphar agrees to ensure that it does not exchange competitively-sensitive information between part of its business and Sisk’s wholesale unit.

According to the commission, Uniphar, as an agent, issues invoices for certain manufacturers and wholesalers of medical supplies. This gives it access to third parties’ prices and terms for specific products. At the same time Sisk Healthcare has the distribution rights for a number of competing products.

As a result the CCPC feared that following a deal Uniphar could use its access to third parties’ prices to influence Sisk Healthcare’s trading decisions.

To address this Uniphar agreed that its pre-wholesale and logistics division would put safeguards in place to prevent the exchange of sensitive information with Sisk Healthcare’s wholesale business.

Building and engineering group Sisk originally developed its healthcare business as a hedge against downturns in construction. The operation has four division that distribute equipment used in surgery, heart disease treatment and diagnostics.

Uniphar welcomed the CCPC’s decision, and confirmed that it has accepted the regulator’s conditions.

The company said the deal would further its ambition to become a leading supplier of specialist treatments and medical equipment in Europe.

Uniphar already supplies drugs, equipment and services for pharmaceutical and medical device manufacturers to hospitals and other customers in the Republic, UK and more recently continental Europe.

Retail veteran Maurice Pratt chairs Uniphar, which has sales of €1.3 billion a year. The company employs more than 1,500 people in the Republic, UK and the Netherlands.

Chief executive Ger Rabbette predicted that the Sisk deal would be key to its development as a European business. “Our acquisition strategy continues to seek businesses with strong management and growth potential which Uniphar can help to accelerate and realise.”

Mr Rabbette noted that Sisk Healthcare would fit in well with Uniphar’s expanding group of stand-alone companies in the Republic, UK and Europe.

Uniphar has indicated that it is considering a stock market launch at some point next year.

1 Council tells Johnny Ronan firm to keep the noise down at D4 Embassy venue
2 How to . . . keep your kids safe playing Fortnite
3 Who are Ireland’s 17 billionaires?
4 How to . . . move (almost) everything to your new phone
5 Are there annual limits on inheritances or gifts to a child?
6 RTÉ’s multiple lobbying meetings with politicians
7 ‘We get on with things despite the politicians’
8 If you have any assets overseas you need to read this
9 Can I get my ex-partner’s name off my mortgage?
10 Q&A: What the motor tax changes could mean for you
Real news has value SUBSCRIBE