Almost €350m still unaccounted for since Ireland moved to euro

Public exchanged less than €400,000 in ‘old money’ last year, the lowest amount ever 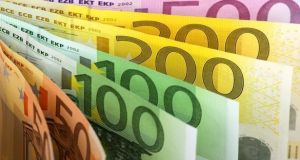 Almost €350 million in old Irish punts is still unaccounted for 19 years after the changeover to the euro, according to the Central Bank.

Every year since, people have continued to exchange the “old money” at the Central Bank but last year less than €400,000 in old Irish punts was exchanged for euros.

It is the smallest amount redeemed since the pre-euro punt banknotes and coins were withdrawn in 2002.

Covid-19 had an impact, forcing the Central Bank to close its walk-in teller service at its headquarters on North Wall Quay, Dublin since public health restrictions were introduced in March 2020. But the bank said the public can continue to exchange old money through the retail bank branch network or registered post.

There is no time limit on exchanging the pound for euro and provision has been made for the unlikely event that everyone who has the old currency in their possession decides to swap it for euro.

Last year people exchanged €281,000 worth of old punt notes in 740 transactions and approximately €117,000 of old Irish pound coins in 292 exchanges, the lowest amount since the euro currency was introduced.

In the first decade after the changeover about 150 people a week arrived at the Central Bank to exchange their old currency.

While the Irish pound was replaced by the euro in January 1999 the euro currency only began in circulation in January 2002.

At the end of 2002, that first year of operation of the euro notes and coins, 90 per cent of Irish punts had been withdrawn from circulation, leaving just under €463 million worth of old notes and coins. Nineteen years later, there is currently around €224 million in old banknotes and €123 million in coin still in circulation, but effectively missing. A punt is worth €1.27.

By law the Central Bank must make provision for the possibility, however remote, that all €347 million will be returned for exchange and it will continue indefinitely to allow punts to be exchanged for euros for their face value equivalent.

Some Irish pounds have been found in skips, in gardens when they are being dug for house extensions, under mattresses, behind wallpaper and in items of clothing donated to charity. The old notes handed in are shredded and recycled, and coins are melted down for reuse.