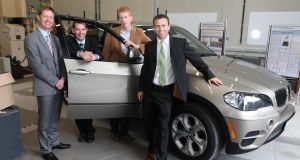 The Connaught Automotive Research (CAR) Group, which is based on the university’s campus, is researching the development of intelligent signal processing algorithms to aid the automatic detection of pedestrians and other vehicles using cameras and other sensors.

The objective is to provide advance warning of hazards on the road and give vehicles more time to avoid a collision. Technology like this is already making its way into production and is expected to be an important feature of self-driving vehicles in the future.

Dr Edward Jones and Dr Martin Glavin, joint directors of the CAR Group recently presented their work in this area to the European Road Transport Research Advisory Committee, which is seeking to develop a common Europe-wide technology transportation platform.

The team has been collaborating with Valeo, which is one of the world’s biggest motor parts suppliers for the last 17 years. The Tuam-based firm started life as Connaught Electronics before being bought by the French-owned vision systems multinational Valeo in 2007. The company, which employs 1,200 people in Ireland, is a specialist in automotive multi-camera systems that offer advanced monitoring options for motorists such as surround view.

“A particular strength of the CAR Group is signal and image processing for a range of applications. Automotive systems is one area of focus and with the work we’re doing with Valeo we are taking information from cameras and extracting useful data from them, such as information relating to other vehicles and pedestrians,” said Dr Jones.

“The benefit of doing this is to give advance warning to drivers of hazards that they might not spot themselves or potentially in the future to allow vehicles to behave more autonomously,” he added.

Dr Jones said it was “inevitable” that such technology would make its way into vehicles and was already on its way to becoming commonplace.

“Once upon a time it was only so-called high-end vehicles that would have advanced system driving technology but it is now more available generally. The technology is becoming increasingly popular and will, over time, also become more autonomous,” he said.

“There are still a lot of things to be done before such systems are in every vehicle because the technology aspect is only one element of it all. There are wider issues to contend with such as social acceptance of autonomous vehicles as well as issues surrounding insurance, infrastructure and so on, but we’re definitely moving in that direction,” he added.

His colleague, Dr Glavin said the group has jointly filed a number of patents with Valeo arising from the collaboration over the last few years.

“Our work is being translated into real products and it is being seen to be of value to the automotive industry,” he said.