Who will be to blame when autonomous cars crash? 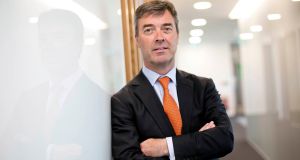 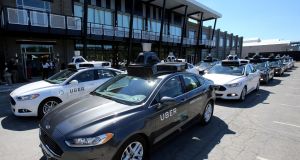 For Galway-born executive James McGlennon, the future of insurance worldwide will be all about digital. As chief technology officer with Boston-based Liberty Mutual Insurance, McGlennon is a key member of the company’s global hierarchy, with a $1 billion-plus annual budget.

He is responsible for a division with almost 6,000 staff out of a global headcount of 50,000.This includes 600 people working for its global technology division out of Dublin and Belfast.

“This is a digital business these days,” McGlennon says from an office overlooking Dublin’s docklands. “Some people describe us as a technology business selling insurance as opposed to an insurance company that happens to have technology.”

He’s getting ahead of himself slightly, although this might well turn out to be the case some day.

“These days, it’s all about digital, about mobile, artificial intelligence about machine learning, and robotic process automation. Think about the autonomous vehicles. They’re going to make cars much safer over time, but what happens to the risk?

“If someone has an accident or an incident . . . is it going to be the person’s fault or the product’s fault?”

It’s an interesting point and one that has been aired lately as the notion of driverless cars gathers speed. “As we look at it, maybe we need to think about this as a commercial risk,” he says.

There’s also the thorny issue of a collision in a driverless car that is likely to prove fatal. Does the driver/passengers get killed or the pedestrian or cyclist?

“That’s a tough question and these are the things that haven’t yet been solved. There are a lot of question still to be answered.”

He speculates that it could be vehicles rather than drivers who are insured in the future.

“Maybe . . . you’ll buy a car and it has embedded insurance because most of the insurance is related to the product and not the driver,” he says. “Clearly, we’re a number of years away from that. But as the technology deepens you begin to wonder what the possibilities will be.”

In the meantime, McGlennon’s mission is to make the process of buying insurance as streamlined and hassle-free for consumers as possible.

“My job is to make sure that the experience for the customer is the best possible one that they can get . . . whether it’s getting an online quote, or on the mobile, or even in filing a claim.

“We have a mobile app in the US where motorcycle owners can go online and get a quote in seconds. These are the things we are going after. We are trying to minimise the challenges for our customers . . . so if you’re going online we’ll try to ask you as few questions as possible but augment the data you do give us with what we know about the environment, or the product, or your car, or whatever. We just want to make it as simple as possible for people to do business with us.”

He talks of using drones to assess damage in difficult-to-reach places caused by hurricanes, tornadoes and other natural phenomena. And of a day when pictures or video are sent from the scene of an accident to an insurer, speeding up the claims process.

This all sounds great but will it make insurance cheaper for consumers?

“If you think about the type of vehicle you drive, the amount of data that will be available will allow us to make more differentiated pricing,” he says, swerving the question ever so slightly. “We’re building partnerships with the manufacturers whereby we know the difference between a 2015 Toyota Corolla and a 2017 model. That might cause the person to get a better quote.”

He says Liberty is also talking to manufacturers about how they can play their part with the designs of their cars.

“One of the things that drives up costs is that if you have a fender-bender, you’re not just damaging the bumper but also the computer sensors underneath and that type of thing. They need to be protected better so the technology doesn’t get damaged. It’s difficult to say if it’s going to be cheaper but it will be more differentiated.”

McGlennon also notes how telematics, which actively monitors driver behaviour, have brought down prices for some customers.

“In the US we have millions of customers who have signed up for the programme. Every customer gets a discount.”

This might be a bit too Big Brother for Irish people, who are inherently suspicious about being monitored. “A lot of younger people are quite comfortable with sharing information if they get a benefit so we’re quite excited about that technology.”

Liberty, which owns the former Quinn Insurance in Ireland, is also investing in start-up businesses that are developing technology that could help homeowners avoid claims.

“If a door is open or you have a leak. If we can predict it, this can save people money,” he says.

McGlennon visits the Irish operation about twice a year and says Liberty has plans for more investment here. This is in contrast to its local Liberty Insurance business, which has been retrenching in recent years at a time when motor premiums have been soaring for Irish drivers.

“We’ve been investing in Belfast and Dublin for a long time and we’ll continue to invest in people and technologies and all sorts of cool things.”

McGlennon says the team here is at the “nexus of our core technology stuff”.

“I was with some of them yesterday and they were demonstrating some virtual reality and augmented-reality technologies that they’re working on.

“Think of a model where you you put on a pair of [virtual reality] glasses and you can walk into a restaurant or a business and make a decision on whether something looks like a fire hazard or a slip risk. It’s also a good training device.”

He says Liberty’s team here is also working on technology to simulate a 3D model of an accident, and there’s a team dedicated to the group’s security operations centre.

“We get about 50 billion messages an hour into our security operations centre. Our team in Dublin monitor this traffic and look for anomalies and things that might indicate people trying to spam us, or phishing attempts. We have thousands of applications on the internet around the world.”

Did the WannaCry cyber attack, which put the wind up everyone who has a computer, affect Liberty or its customers, and what steps has the company taken to ward off any threat?

“The recent WannaCry malware situation is an example of how cyber security threats cut across all industries and organisations. Protecting our employee and customer data is a top priority for our IT organisation and we’re continuing to monitor the situation,” is McGlennon’s rather corporate response.

Moving on . . . He was in town to open a new floor in Liberty’s office in Blanchardstown, west Dublin, for the global technology team.

“We’ll continue to grow into that. We’re continuing to invest here. It’s a great environment.”

He left Ireland 22 years ago to work in the US as a consultant and joined Liberty in 2008. His career in the US has spanned banking, telecoms and now insurance, all with a technology angle. “Lots of industries and lots of companies. It’s easy to be Irish in Boston,” he says.

In his spare time, he serves on the board of overseers for the Museum of Science in Boston and is on the advisory board of the Irish International Immigration Centre.

McGlennon’s advice to graduates is to consider technology as a career. “It’s one of those skills that you can apply to any industry, regardless. There’s not many skill sets that you can say that about. It gives people a lot of flexibility and mobility.”

“Things will change and there’ll be a lot more specialisms. Technology will be prevalent in every industry. It will be more and more exciting and the customers at the end of the day will benefit.”

Something that we might expect: Passionate about emerging technology and innovation.

Something that might surprise: He recently ran his first marathon, completing the New York City run in less than four hours.