HSBC head of retail will replace Richie Boucher in October 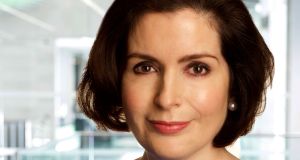 Francesca McDonagh will be Bank of Ireland’s first female chief.

Bank of Ireland has appointed Francesca McDonagh as its new group chief executive. She will take up the role in October and succeed Richie Boucher who steps down later this year.

A graduate of Oxford University, Ms McDonagh (42) joins Bank of Ireland from HSBC where she is head of retail banking and wealth management for the UK and Europe. She will be the Irish lender’s first woman chief executive.

In her role with HSBC, Ms McDonagh was responsible for all aspects of retail customer service, channels, products and segments of its three brands.

Commenting the appointment, Archie Kane, the Governor of Bank of Ireland, said: “The board conducted a thorough search and from a strong field selected this exceptional candidate. I am very pleased that we have been successful in attracting a person of the calibre and experience of Francesca to the group.

“She has been with HSBC for 20 years, during which time she has held a number of senior leadership roles in the bank across seven different countries. We very much look forward to working with her over the coming years as she leads the bank and its experienced management team into the next phase of its development.”

Mr Kane said Mr Boucher had been an “outstanding success” at Bank of Ireland, and leaves the company in a much stronger position than he inherited when he became CEO in February 2009.

“On behalf of the board, I would like to express our sincere appreciation,” he said.