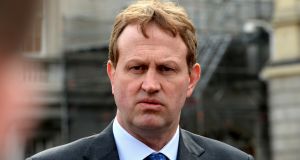 The special liquidators of the former Anglo Irish Bank reported suspected criminal offences to the Garda Síochána on five occasions, the Minister for Finance Paschal Donohoe has said.

Individuals are legally obliged to report possible frauds under section 19 of the Criminal Justice Act 2011, which was introduced to strengthen the law against white-collar crime in companies.

The section makes it an offence for a person to withhold information which they know or believe might be of material assistance in the prevention of certain crimes by another person or securing the apprehension, prosecution of conviction of a person for such crimes.

Offenders can receive an unlimited fine or a maximum jail term of five years under the law.

Mr Donohoe said in response to a parliamentary question from Fianna Fáil justice spokesman Jim O’Callaghan that the special liquidators of Irish Bank Resolution Corporation, the name assigned to Anglo in 2011, invoked section 19 of the Criminal Justice Act 2011 on five occasions.

One of the section 19 reports submitted by the IBRC liquidators to the Garda related to the activities of Sean Quinn and members of his family concerning asset-stripping in the family’s international property group which has assets in Ukraine, Russia and India.

The management team who ran the nationalised bank prior to the appointment of special liquidators Kieran Wallace and Eamon Richardson of KPMG also submitted a section 19 report to the Garda over similar activities.

The former management team, who took over the bank after it was taken into State control, accused Mr Quinn, his daughters Ciara, Colette, Aoife and Brenda, his son Sean jnr and his nephew Peter Darragh of conspiring to put property assets beyond the reach of the bank.

One of IBRC’s executives Richard Woodhouse claimed in court that the bank had been “met with fraudulent activity and delays which I believe have been orchestrated by the defendants”.

Mr Quinn and his son served jail time in 2012, while Peter Darragh Quinn never attended court on the day of the contempt ruling and a warrant was issued for his arrest.

In April 2019, Mr Quinn’s five children settled a long-running court action with IBRC and avoided a €440 million judgment against them on the condition that they help the special liquidators secure the return of the properties to the bank.

The settlement brought forward the expected wind-up of the failed Anglo Irish Bank and Irish Nationwide Building Society, also part of IBRC, by one year to the end of 2021.

1 Bank leaked my loan request to family who tried to rip me off
2 Ryanair and Aer Lingus monitor impact of conronavirus on travel to Italy
3 Boris Johnson's new immigration regime will damage much more than industry
4 Mastercard to create 1,200 new jobs by expanding base in Dublin
5 Varadkar resigns amid warning impasse will hit the economy
6 Google completes purchase of Treasury Building for €120m
7 Garda mobile contract win causes concern over Eir’s use of Huawei kit
8 Billionaire Zara founder and German funds vie for prime Dublin offices
9 Exposed to coronavirus: How Irish business is coping with fallout
10 Knock gets visit from world’s largest passenger plane
Real news has value SUBSCRIBE