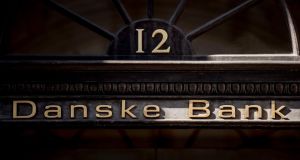 The Republic’s procurement office has said it is monitoring the unfolding money-laundering scandal at Danske Bank, months after picking the Danish group to provide day-to-day banking services to the Government.

The contract, announced in June, covers the payments of social welfare, wages and pensions.

A spokeswoman for the Department of Public Expenditure and Reform said the Office of Government Procurement (OGP) “is aware” that Danske Bank admitted earlier this month that a large part of about €200 million that flowed through its Estonian unit between 2007 and 2015 may have been laundered.

Europe’s biggest money-laundering scandal prompted Danske’s chief executive, Thomas Borgen, to quit on September 17th and Denmark’s government has said it could lead to a fine of up to four billion kroner (€540 million). Criminal investigations are ongoing in Denmark and Estonia, while aspects of the case are being examined by authorities in the UK, US and Switzerland.

“The OGP will continue to observe developments in this regards,” said the department spokeswoman. “The OGP is at all times cognisant of the responsibility to conduct business in line with applicable laws, rules and regulations.”

“In the event that circumstances arise that would warrant the exclusion of a tenderer from a framework, [the OGP] is in a position to take such steps as may be necessary.”

The award of the banking services contract this year to Danske, supported by An Post, marked the first time the job was subject to a competitive tendering process. Bank of Ireland previously held the contract.

Dankse Bank bought National Irish Bank in 2005, but pulled out of retail banking in the Republic in 2013 after it racked up massive bad-loan losses during the financial crisis. However, it has remained in the wholesale banking services market for corporate and institutional clients.

Danske said earlier this month that its headquarters in Copenhagen and its Estonian branch failed for years to prevent suspected money laundering involving thousands.

The group said it was unable to estimate the total amount of suspicious transactions, but its non-resident operation in the Baltic nation probably had total flows of €200 billion.

A report commissioned and paid for by Danske Bank and conducted by Danish law firm Bruun & Hjejle found misconduct had taken place at group’s Estonian branch over the space of eight years, involving “objectionable” omissions, inaction and faulty processes at all levels of the bank.

That meant the bank “was not sufficiently effective in preventing the branch in Estonia from being used for money laundering,” the report found.

Danske Bank said it suspected that some of its employees in Estonia may have helped those customers. A number of its staff have been reported to the police.

All told, about 6,200 customers have been investigated so far, many of them Russian individuals and Russian-owned companies based abroad, “the vast majority” of which “have been found to be suspicious,” the bank said.