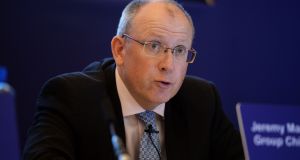 PTSB chief executive Jeremy Masding has repeatedly said this year that the bank had run out of options as it came under regulatory pressure to lower its NPLs. Photograph: Eric Luke

US investment powerhouse Pimco has been lined up to buy the rights to most of the income from a portfolio of €1.3 billion of problem home loans that Permanent TSB is planning to refinance in the bond market, The Irish Times has learned.

PTSB confirmed on Thursday that it has arranged to sell bonds backed by income from the portfolio of non-performing loans (NPLs), including some €900 million of so-called split mortgages, on the market in order to shift the assets off its books.

This is known in the financial markets as a residential mortgage-backed securitisation (RMBS).

The deal is being structured by PTSB selling the loans to a securitisation vehicle, called Glenbeigh Securities 2018-1 DAC, which will then issue the bonds. PTSB has said that it will retain some 5 per cent of the bonds.

However, sources have said that Pimco, one of the world’s biggest bond investment firms, and a unit of German insurer Allianz, will acquire most of the notes.

A prospectus for the bond sale said that “it is expected on the closing date [of the transaction], an investor will acquire a majority holding in the notes, giving it sufficient ability to pass or block all noteholder resolutions” relating to Glenbeigh.

A spokesman for PTSB declined to comment on the identity of the investor. No comment was available from Pimco.

Pimco has emerged as one of the most active investors circling Irish mortgages being offloaded by banks in recent times. The group joined forces with Goldman Sachs late last year to buy Danske Bank’s remaining €1.8 billion of Irish mortgages, before securitising the portfolio.

Lloyds Banking Group’s sale earlier this year of the last £4 billion (€4.5 billion) of Irish loans written by its Bank of Scotland unit before the financial crash also involved Pimco. While Lloyds sold the portfolio to Barclays, the latter had already lined up a securitisation of the loans, with Pimco and UK asset manager M&G Investments buying much of the notes.

Although the loans in the PTSB €1.3 billion transaction have been restructured by the bank in recent years, they continue to be classified as NPLs due to the nature of the new arrangements.

The fact that the PTSB portfolio is known to be generating cash equating to more than 3 per cent of the assets makes the loans attractive to investors like Pimco.

PTSB’s chief executive Jeremy Masding has repeatedly said this year that the bank had run out of options as it came under regulatory pressure to lower its NPLs, which stood at 26 per cent of its total loans in January, to the European Union average, which currently stands at 3.5 per cent.

The RMBS deal, together with PTSB’s agreement in July to sell €2.1 billion of distressed mortgages to an affiliate of US private equity group Lone Star, will reduce the bank’s NPLs ratio to below 10 per cent.

Mr Masding told reporters on Thursday evening that a further 2 percentage points would be knocked off that ratio over the coming 12 months as previously restructured loans move into the “performing” category after a probationary period.