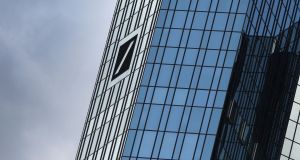 Deutsche Bank shares were under pressure after news of the raid emerged. Photograph: Getty

A German prosecutor investigation of Deutsche Bank is set to continue into a second day on Friday after a money-laundering raid on its Frankfurt headquarters.

In total more than 170 officials were involved in five separate raids at bank offices in Frankfurt and nearby Eschborn, as well as a private apartment. The most high-profile raid saw at least a dozen police vehicles pull up outside the main skyscraper in Germany’s financial capital, starting a steady share slide on Frankfurt’s Dax exchange.

Investigators said they had secured files in paper and electronic form in a raid linked to the the Panama Papers revelations of 2016 by the Consortium of Investigative Journalists, of which The Irish Times is a member.

The inquiry covers the years 2013 to 2018 during which, in 2016 alone, about 900 customers and €318 million reportedly passed through a Deutsche Bank subsidiary registered in the British Virgin Islands.

Nadja Niessen, spokeswoman for the Frankfurt state prosecutor, said it had received the information behind the raid from federal criminal police from the offshore leaks.

“Through this the suspicion grew that Deutsche Bank helped customers found offshore companies in the interests of tax avoidance,” she said.

The raid took Deutsche Bank by surprise, a spokesman said on Thursday afternoon, as the company believed it had already turned over all relevant offshore documentation to authorities.

“In the last years we have always shown that we . . . are ready to work closely with the authorities,” said Mr Jörg Eichendorf, “and we will show this readiness again”.

Thursday’s raid is just the latest in a long string of scandals to hit the struggling bank, once Germany’s blue-chip financial calling card around the world.

The 2016 Panama Papers scandal exposed its ties to massive money-laundering by millionaires and billionaires via the now defunct law firm Mossack Fonseca, based in Panama City. Before those offshore links were exposed, Deutsche Bank was linked to aggressive subprime lending in the United States, selling customers products described by its own traders as “shit”. A US Senate investigation ruled Deutsche Bank’s reckless business practices had contributed to the 2008 banking crisis.

In a telling measure of how far the bank’s fortunes have fallen, news of the raid was not even the top story in main German news. Meanwhile, company shares worth €82 a decade ago and €30 four years ago were struggling to find buyers on Thursday for €8.27, down about three per cent in one day.

Long-term Deutsche watchers said they were surprised – if not altogether shocked – by renewed prosecutor attention in the bank’s activities.

“It’s shocking how much money has been burned because of wrongful behaviour and dubious business with customers,” said Mr Wolfgang Gerke, president of the Bavarian Banking Centre. “Reputation suffers when large fines are due and one can only hope Deutsche Bank isn’t headed again towards large fines.”

The latest raid is a particular blow for Mr Christian Sewing, the bank’s fourth chairman in six years.

After years of probes and corporate identity crises, Mr Sewing had hoped to complete a restructuring process, turn around the bank and boost struggling employee morale.

Now he could face uncomfortable questions as, until his appointment last April, he was was responsible for Deutsche’s private banking division at the centre of the raid.

Two months ago, in an unprecedented move, Germany’s banking regulator BaFin installed one of its employees into Deutsche to monitor whether the bank was doing enough to combat money-laundering and suspected terrorism financing.

Shares in Deutsche Bank fell 3 per cent to €8.32 on Thursday, taking their decline for the year to 48 per cent.

The German lender’s additional tier one bonds also fell to their lowest prices this year. These risky equity-like securities, which are first in line to take losses in a collapse of the bank, are now trading as low as 83 cents on the dollar.

Deutsche is also facing questions about its role as a former correspondent bank for Danske Bank’s Estonian branch, which is embroiled in a €200 billion money laundering scandal.

– Additional reporting by the Financial Times