Shares in bank continue to fall 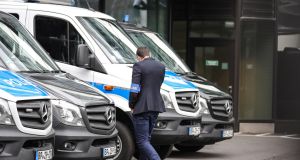 Criminal prosecutors have continued to raid Deutsche Bank’s offices in Frankfurt on Friday morning as they seek evidence on suspected money laundering at Germany’s largest bank, people familiar with the situation told the Financial Times.

The prosecutors suspect that the alleged misconduct at Deutsche stretched into this year. The transactions that are under scrutiny started in 2013 and were carried out in the bank’s wealth management division, a unit that came under the remit of Christian Sewing in 2015 until he was promoted to chief executive of Deutsche in April.

Among the offices searched was the one of Sylvie Matherat, Deutsche’s chief regulatory officer, according to a source. The criminal prosecutors stressed that no executive board members were among the suspects.

Shares in Deutsche continued to fall on Friday, with the stock down 3 per cent in morning trading at a new record low of €8.04. Since Mr Sewing was appointed chief of the bank, the lender’s market value has fallen 29 per cent.

The two Deutsche employees at the core of the case are managing directors in the bank’s compliance and wealth management units. Both are still employees of the lender and so far have not been disciplined, said a person familiar with the matter.

Prosecutors suspect that neither flagged up suspicious money transfers by clients into Deutsche accounts in the British Virgin Islands that involved funds likely related to criminal activity. Deutsche employees started to raise suspicious transactions only after the bank’s activities in offshore tax havens were exposed by a trove of leaked documents in early 2016 in the so-called ‘Panama Papers’ revelations of 2016 by the Consortium of Investigative Journalists, of which The Irish Times is a member.

In 2016 alone, the suspicious transactions stood at €311 million, but people familiar with the case say the overall sum could be much bigger, because the alleged misconduct carried on for more than five years.

The Deutsche unit at the core of the case is called Regula Limited, domiciled in Road Town in the British Virgin Islands, a source said, confirming a report by German daily Süddeutsche Zeitung, one of the news organisations that led the reporting about the ‘Panama Papers’.

Regula has been listed as a 100 per cent-owned subsidiary in Deutsche’s annual reports since 2010 and is classified as an “other enterprise” in its most recent annual report. Deutsche sold the entity in March, 2018, according to the person.

Deutsche on Thursday insisted that executives had “already provided the authorities with all the relevant information” with regard to the ‘Panama Papers’ disclosures.

“Of course, we will co-operate closely with the public prosecutor’s office in Frankfurt, as it is in our interest as well to clarify the facts,” the bank said. “In recent years, we have proven that we fully co-operate with the authorities - and we will continue to do so.”