UBS says it will not make bitcoin a portfolio allocation 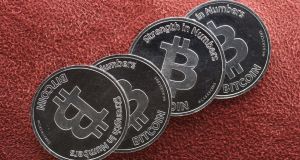 While sceptics have called bitcoin’s rapid advance a bubble, it has become too big an asset for many financial firms to ignore.

Bitcoin has also not reached the critical mass to be considered a viable currency to invest in, UBS’s Mark Haefele said . The total sum of all cryptocurrencies is “not even the size of some of the smaller currencies” that UBS would allocate to, he said.

Bitcoin has split investors over the viability of the volatile cryptocurrency and UBS is among its critics. Bitcoin capped a resurgent week by climbing within a few dollars of a record $8,000 on Friday.

While sceptics have called bitcoin’s rapid advance a bubble, it has become too big an asset for many financial firms to ignore. The rally on Friday came after bitcoin wiped out as much as $38 billion in market capitalisation following the cancellation of a technology upgrade known as SegWit2x on November 8th.

UBS chairman Axel Weber this month said bitcoin was a speculative investment and not a store of value, while Credit Suisse CEO Tidjane Thiam described the speculation around bitcoin as the “very definition of a bubble”.

JPMorgan Chase CEO Jamie Dimon has called bitcoin “a fraud” that will eventually blow up. – Bloomberg

1 Who are Ireland’s 17 billionaires?
2 My father in a nursing home wants to gift me his house
3 Are there annual limits on inheritances or gifts to a child?
4 Countries that fail to attract immigrants will lose out – Microsoft chief
5 Apple’s secretive Cork facility opens up – to an extent
6 State subsidises public sector retirees to cover gap until State pension
7 Richer countries must do more to tackle climate change, Thunberg tells Davos
8 Fevertree loses its sparkle as taste for premium tonic sours
9 Irish-headquarted Allergan sale third biggest deal in world last year
10 O’Flynn company ‘mistakenly’ got go-ahead for Birmingham project
Real news has value SUBSCRIBE