Apologies issued as pressure mounts to deal with issue 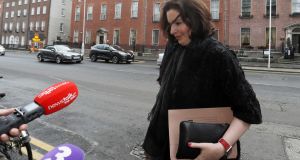 Francesca McDonagh, the new Bank of Ireland chief executive, arriving at the Department of Finance for talks over the tracker mortgage issue.

Bank of Ireland, led for less than a month by new chief executive Francesca McDonagh, said it will start compensating 4,300 identified overcharged mortgage customers on November 10th and complete this by the end of the year.

This includes 600 accounts where borrowers were not given a tracker mortgage that they were entitled to and 3,700 customers who were overcharged by an average of 0.15 per cent on their tracker rates, the bank said on Wednesday. Both groups have already been returned to the right rate, it said.

However, the bank also revealed that its number of impacted customers may rise as it committed to reviewing groups of borrowers not currently accounted for under its redress scheme. Bank of Ireland said this review is being prioritised and that it will be issuing an update in mid-November.

“I unreservedly apologise to all impacted customers for the financial loss and anxiety this has caused to them and their families,” said Ms McDonagh. “All impacted customers must be identified as quickly as possible and treated fairly. The examination will continue to be a priority until the position has been resolved for every last impacted Bank of Ireland customers.”

It is believed that the main group of customers currently being excluded are 1,800 current and former staff of the bank itself.

Bank of Ireland has known of problems in its tracker portfolio since at least 2010, when it was forced to put 5,100 customers on the wrong rate on the correct one.

AIB, the country’s largest mortgage lender after taking over EBS in 2011, revealed on Wednesday that its number of overcharged mortgage customers could top 4,600 by the end of the year.

As of the end September, the bank had identified 3,416 borrowers who had been wrongly denied a tracker rate, 91 per cent of whom have received refunds and compensation. That will rise to 100 per cent by the end of the year, it said.

However, the bank, led by chief executive Bernard Byrne, estimates that a further 170 such cases may emerge by the end of the year. These will be compensated by the end of March, it said.

The bank also disclosed that as many as a further 1,016 customers were charged a higher rate than agreed on their tracker mortgages. Just over half of the 736 confirmed cases have been redressed and compensated to date. This will rise to 100 per cent by the end of December, AIB said.

The majority of the customers who were incorrectly charged a higher tracker margin were “impacted for a short period of time and by up to €500,” the bank said.

“AIB again sincerely apologises to customers and reiterates that this should never have happened,” it said.

AIB’s identified cases do not include a group of borrowers who, as The Irish Times reported on Wednesday, were initially put in fixed-rate loans before the financial crisis and would ordinarily have had an option to move onto a tracker loan after the fixed-rate period came to an end.

However, those who came off fixed-rate periods after October 2008, when the bank stopped offering tracker products, were not allowed to move onto such a mortgage.

Permanent TSB, once the country’s largest mortgage bank, has said it plans have made offers for redress and compensation by the end of the year to all 1,971 customers it has identified as having been wrongly denied a tracker mortgage.

The bank was the first to come under public scrutiny for the tracker-mortgage issue when it disclosed in July 2015 that almost 1,372 customers, including those of its former subprime unit Springboard Mortgages, had been caught by overcharging.

That total figure increased after the Central Bank ordered the nation’s lenders in December 2015 to review their portfolios for tracker-mortgage issues.

It has restored 98 per cent of the affected borrowers to the right rate and offered redress and compensation to 82 per cent – or 1,608 customers – to date, according to a statement from the bank on Wednesday.

The bank, led by chief executive Jeremy Masding, plans to put the remaining impacted customers on the correct mortgage rate by the end of the month and issue remediation offers to the final 363 borrowers by December 31st.

“Permanent TSB fully accepts the very strong concern and disapproval which [Minister for Finance Paschal Donohoe] expressed about the management of this issue across the banking sector,” the bank said.

“On Monday, on behalf of the bank, we made a full apology for this issue to the Minster and we repeat that apology publicly today. The bank accepts the failures that led to this issue should not have occurred.”

The bank said that its work will be subject to assurance testing by the Central Bank.

Ulster Bank has said it plans to pay refunds and compensation by the end of the year to almost 29 per cent of 3,500 customers caught up in the tracker mortgage controversy.

The bank, which required a £15 billion (€16.8 billion) bailout from its parent Royal Bank of Scotland during the financial crisis, has put all its identified impacted customers back on their tracker rate and paid redress and compensation to 100 of these to date, it said in a statement on Wednesday.

Where a customer is identified as having lost their home as a result of the loss of a tracker rate, the bank said that it will communicate with them and arrange an upfront initial payment of €50,000. Ulster Bank said last month that it estimates that the number of customers who lost their homes as a result of overcharging is likely to be less than the 14-15 cases indicated last December.

“We would like to apologise unreservedly for the failures which led to customers losing their tracker rates, as well as for the length of time which it is taking us to put this right,” said Ulster Bank chief executive Gerry Mallon.

“While we have returned existing customers to the correct tracker rate and started to pay redress and compensation, I acknowledge that this process is taking far too long to complete and this is not acceptable.”

“We have listened, we are learning and we are focused on completing this process, putting this right and rebuilding our customers’ trust in Ulster Bank.”

KBC Bank Ireland revealed the extent of its tracker-mortgage problem for the first time on Wednesday, saying that up to 1,661 of its mortgage customers may have been hit by overcharging.

The figure includes 571 customers that it had “rectified” in 2010, and a further 490 borrowers identified as impacted to date. KBC Bank Ireland said that it anticipated that an additional 200 to 600 more cases may be uncovered as it continues its review.

“KBC expects to have concluded the identification of the vast majority of customers impacted by the tracker examination by the year end,” it said.

“Payment and redress for customers identified so far will commence in early November. For straight forward cases, which we expect to be the majority, we expect to complete payment by the year end.”

The bank said it “fully acknowledges the past errors that occurred in relation to tracker mortgages should not have happened, were wrong and we sincerely apologise for this once again.”