Interim chief Allen Parker had been seen as contender 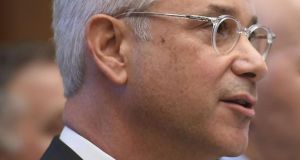 Wells Fargo has named the boss of Bank of New York Mellon as its new chief executive, ending a six-month search prompted by a fake accounts scandal.

Charles Scharf, who was chief executive of Visa before taking the same role at BNY Mellon in 2017, will join the bank later this month, Wells said on Friday.

Unusually, Mr Scharf will continue to be based in New York, where he lives, 2,900 miles from Wells’ San Francisco headquarters and in a different time zone.

Allen Parker, interim chief executive, will continue to lead the bank until Mr Scharf starts. Mr Parker had been seen as a contender for the permanent job as the search dragged on.

Brian Kleinhanzl, a banks analyst at KBW, said the appointment was “a bit of a surprise” given Mr Scharf’s relatively short tenure at BNY Mellon. “It removes an overhang for Wells Fargo as operating without a permanent CEO was a net negative,” he added.

Mr Scharf said he was “honoured and energised by the opportunity to assume leadership of this great institution, which is important to our financial system and in the midst of fundamental change”. – Copyright The Financial Times Limited 2019