‘Too early to say’ if insurance premiums will rise after Ophelia 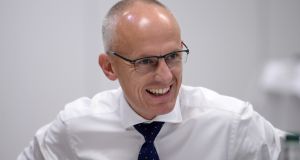 Kevin Thompson, chief executive of Insurance Ireland said it was “too early” to comment on whether insurance premiums would rise after Storm Ophelia. Photograph: Dara Mac Donaill/The Irish Times

It’s too early to say whether insurance premiums will rise after claims made on the back of Storm Ophelia, Insurance Ireland has said.

Speaking on RTÉ’s Morning Ireland radio show, Insurance Ireland chief executive Kevin Thompson was asked whether consumers could expect a rise in insurance premiums after the cost of Storm Ophelia is counted.

Mr Thompson said that it was “too early to say”, noting that the industry had been able to cope with losses in the past and would be able to do so in the future.

Asked whether those who do make a claim will have trouble getting re-insured, Mr Thompson said “there is no blacklisting in relation to insured events”.

Yesterday, FBD chief executive Fiona Muldoon said “while it is too soon to give an estimate of the ultimate net cost of the storm to FBD, unfortunately given its severity, we can be sure that a number of our customers are affected”.

An Insurance Ireland spokesman told The Irish Times on Monday that it would be Tuesday before insurers would be in a position to start assessing damage and how much of that is likely to end up in claims.