No return for JPMorgan Chase staff to London base 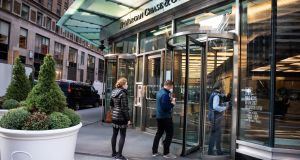 JPMorgan Chase and Co is the latest bank to halt plans to bring back more workers to its London base after the UK government urged people to work from home to stem a surge in virus cases.

The US lender said it will wait on increasing the number of workers returning to UK sites including Canary Wharf following government guidance, according to a memo Wednesday seen by Bloomberg News. While some other lenders have encouraged people to return to working from home, JPMorgan said its business units will decide who is needed in the office.

“Whatever your established working pattern, you should continue to follow the direction you have been given by your management team and listen out for any potential changes,” noted the memo. “We will need to maintain a minimum combination of people from each of our businesses and support functions in the office.”

The move follows similar efforts by Goldman Sachs Group and Citigroup to heed government advice and reassure staff that they can work from home after British prime minister Boris Johnson backtracked from advice last month encouraging a return to offices to boost the economy.

Wall Street banks have broadly advocated for the return of workers arguing that it improves productivity and helps maintain company culture. Earlier this month, JPMorgan requested that 50 per cent of its deal makers come to the office on a given workday, up from 25 per cent previously.

It had also set a deadline of September 21st for many senior workers to be back in offices from London to New York. The bank, which has about 19,000 workers in the UK and 12,000 in London, also said that its offices remain open to staff if they need to occasionally venture in.

Goldman Sachs encouraging its London employees to go back to working remotely if possible, though its Plumtree Court office will remain open for those who need it. HSBC will “pause” the return of teams to its UK offices. Barclays, Société Générale and insurance marketplace Lloyd’s of London have all told some UK staff to return home, according to the BBC. – Bloomberg